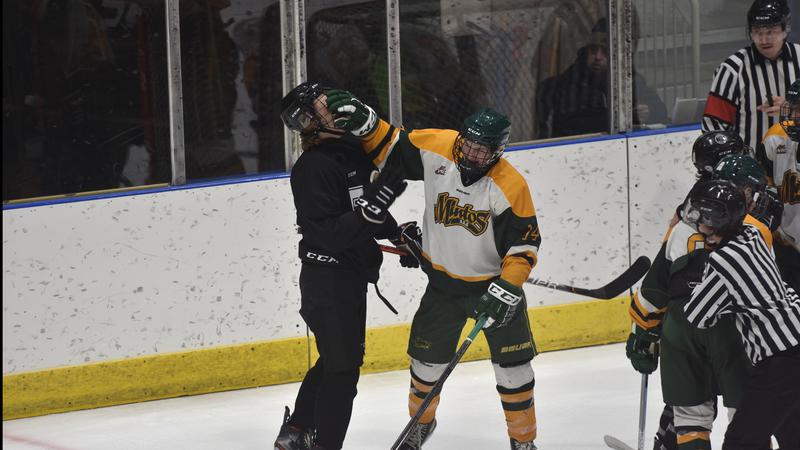 Hunter Nakonechny and Brady Holtvogt, Mintos goaltenders, shared the ice time in the slot tonight, but it was Nakonechny who suffered the loss. He made 14 of 17 saves while Holtvogt made 12 saves. Prince Albert now drops to 0-2-1-0 in exhibition play.

The Mintos wrap up their preseason at Warman tomorrow night against the Wildcats.

Although this game was the first of the preseason for the Blazers, the team already looked in good shape midway through the season. Saskatoon scored three first-period goals in the first ten minutes of the period thanks to a pair of goals from Seitz and one from Shurgot.

The Mintos recovered one later in the period while on the power play with Blanchard feeding Nelson up front who ripped him past the Blazers goaltender to make it 3-1 after one.

Saskatoon and PA traded goals in the second with the Blazers scoring first. Granger’s point shot was deflected in front by Dahlen to restore their three-goal lead.

The Mintos would react in a big way in the last minutes of the period. Watson’s point shot was stopped, but Pickford fended off the loose puck to cut Saskatoon’s lead.

Much like the second, the two teams shared the goals in the third with Knittig scoring for the Blazers and Pickford scoring his second of the night for the Mintos.

That’s as close as PA has come, as the Saskatoon Blazers defeated the PA Mintos 5-3.

The Mintos now head south to play their fourth and final preseason contest where they will face the Warman Wildcats at the Legends Center.

In Piedmont Park, Noguchi’s ‘Playscapes’ are both modern art and a children’s playground – WABE