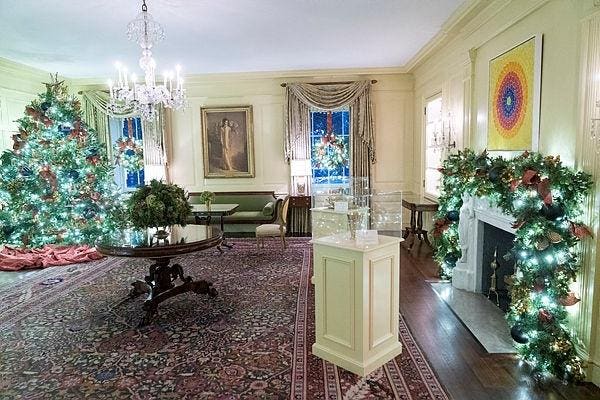 From the White House to America’s premier museum of modern art – Washington, DC as an artistic destination

With all it’s known for, Washington, DC can easily be overlooked as a top destination for art lovers. From the National Gallery of Art to the Smithsonian National Portrait Gallery, via the Smithsonian American Art Museum and the Renwick Gallery, the Smithsonian’s National Museum of Asian Art, the Philips Collection – America’s first museum of modern art – the Howard University Gallery of Art and of course all the sculptures and monuments to be found throughout the city, forget the politicians and lobbyists, many of the nation’s greatest artists are moving to Washington, DC

Another extraordinary art collection in the nation’s capital belongs to the White House. Some 60,000 objects ranging from decorative arts and furniture to painting and sculpture are in his possession.

While each administration greatly customizes the items on display in the upstairs family living quarters and in the Oval Office, the layout of the downstairs and first floors remains largely the same, at discretion. of the president and the first lady.

For U.S. citizens, requests to participate in a public tour of the White House must go through each visitor’s member of Congress at least 21 days in advance. Additional time should be allowed to avoid scheduling conflicts and stockouts. Non-US citizens interested in a visit should contact their embassy in Washington, DC. Find a full list of requirements for making a public tour of the White House here.

For those who succeed, there is a must-see piece in the Vermeil room on the ground floor: â€œResurrectionâ€ by Alma Thomas.

This radiant expression of bright color became the first painting of an African-American woman to enter the White House collection when it was acquired in 2015.

As part of its educational mission, the White House Historical Association has developed a 360-degree virtual tour of the Executive Mansion over the past year, as tours have been reduced due to COVID-19. An even more recent project sheds new light on slavery in the White House and surrounding neighborhoods.

The organization, founded in 1961 by Jackie Kennedy, also works extensively with school groups, produces its own podcast, and raises funds to support its mission of protecting, preserving and providing public access to the building’s history. One way to do this is to order an official White House Christmas decoration each year.

Beyond “Resurrection” at the White House, the Phillips Collection currently offers a unique opportunity to see the work of Thomas (1891-1978) in volume. Longtime DC resident and educator receives full retrospective during “Alma Thomas: Everything’s Beautiful” through January 23, 2022. This comprehensive overview of her extraordinary career includes 50 paintings spanning the period 1922-1977, as well as puppets , costume designs, prints made with her students and her sculpture long before her mid-1960s ‘Alma’s Stripes’ breakthrough for which she became famous.

Not only does the Phillips Collection present a historic exhibit for Howard University graduate Thomas, but also another Howard graduate: David Driskell (1931-2020). “David Driskell: Icons of Nature and History”, presented until January 9, 2022, brings together around 60 of his works. Overshadowed by his career as one of America’s foremost art historians, educators, and curators, Driskell’s artistic creation takes center stage here, and what a treat it is – joyful, sensitive, expressive, vibrant, narrative.

Photographer James Van Der Zee has compiled an extraordinary chronicle of Harlem in the 1920s and 1930s, a body of work on display until May 22, 2022 at the National Gallery of Art during the exhibition “Photos of James Van Der Zee : a portrait of Harlem â€.

“James Van Der Zee created an intimate, festive and rich portrait of African American life in Harlem in the first half of the 20e century, â€said Diane Wagoner, curator of 19th century photographs at the National Gallery, in this video. “His sensitive studio portraits presented a prosperous and cosmopolitan take on black modernity.”

The National Gallery shares this view through 40 works in its collection featuring the studio portraits of Van Der Zee as well as his photographs of Harlem nightclubs and storefronts, religious, social, political and sporting community groups. His carefully composed photographs reflected the personality, aspirations and spirit of his models.

A huge treasure trove of Van Der Zee’s images – tens of thousands of photos and negatives – was jointly acquired by the Metropolitan Museum of Art in New York and the Studio Museum of Harlem earlier this month, ensuring further attention for this underrated artist.

A home for the future curious, the Smithsonian’s Arts and Industries Building reopened in November for the first time since 2004 after undergoing a massive renovation. He did so with the building-wide exhibit, “FUTURES”. As part of the fun, visitors can talk directly to the future and have real-time holographic conversations across the globe with residents of Doha, Qatar.

Passers-by from a twin portal site in Msheireb district in Doha, Qatar, are connected to those in DC, allowing participants from each location a unique opportunity for cultural exchange.

“The holo-capsule will connect Americans and Qataris like never before, serving as a symbol of our commitment to continue the dialogue among our nations,” said HE Meshal Bin Hamad Al-Thani, Ambassador of the State of Qatar to the States. -United.

For overnight stays in Washington, unless you are invited to stay at the Bidens, consider booking at the Kimpton Banneker Hotel.

The Banneker takes its name from Benjamin Banneker, an inventor, mathematician, and astronomer born to a free African-American woman and former slave father in 1731. Among countless notable accomplishments, he helped study what would become the city, establishing its meridian line, now 16e Street along which the hotel is located.

Use Christmas time to initiate peace and unity, Nigerians urged