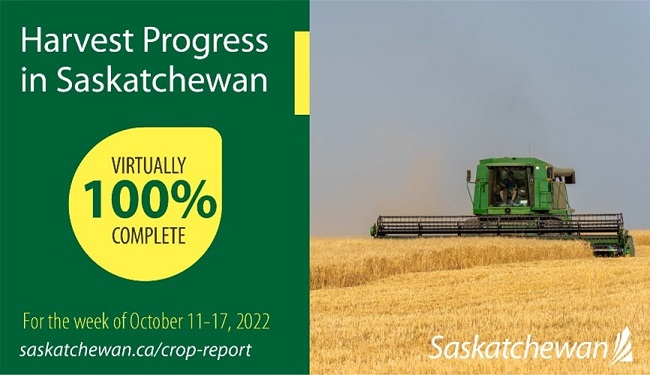 The Minister of Agriculture
Submitted

Harvest is virtually complete across Saskatchewan as dry weather through much of September and October allowed growers to harvest their crops efficiently without major weather delays.

Harvesting started early for many growers in the southwest and midwest regions after another dry growing season. Late planting dates and weekly rainfall during the flowering and seed-filling stages delayed harvest in the eastern and northern parts of the province until the second half of August, but resulted in the potential for higher yield. However, the weather remained dry and growers were able to speed up their harvest and bring in their entire harvest without major issues.

Now that harvest is complete in all parts of the province, growers would like to see regular precipitation before the ground freezes and winter arrives.

Crop yields vary across the province and are highly dependent on the amount of moisture received throughout the season. Yields in the Southwest and Midwest regions are again below average, with some growers reporting slightly improved yields compared to last year. Yields in the eastern and northern regions have improved a lot, and many growers are reporting above-average yields. The biggest impacts on yields this year were drought, ground squirrels, grasshoppers, wind and spring drowned crops.

Quality ratings for all crops are largely in the top two categories for each respective crop. The largest contributors to the downgrade were light kernels due to drought, insect damage, bleaching or discoloration of kernels from rain, and an increase in diseases such as ergot in grain crops such as spring wheat and durum wheat.

Moisture conditions are a concern for some growers, especially those who have struggled throughout the season with infrequent and minimal rainfall. Even areas that started the year with excess moisture are now becoming very dry and growers are hoping for rain soon.

Due to improved hay yields, winter feed supplies for livestock, such as cattle, have also improved. Producers in the northern and eastern regions have indicated that they will have excess or adequate supplies of hay, straw, green forage and feed grains. Producers in the southwest and mid-west report that they have not been able to fully replenish their feed stocks and are sourcing from other parts of the province, with some buying hay from Alberta or Manitoba. For some producers, their feed inventory is too depleted and the feed too expensive to buy, causing them to reduce their herd size to accommodate the feed available to them.

Water hauling was once again common in many parts of the province as dugouts, swamps and other bodies of water dry up and become unsafe for livestock. Producers constantly tested water quality and were forced to move livestock off pastures that had unsafe water, putting increased pressure on already struggling grasslands. More rain and above average snowfall this winter are needed to ensure that water quantity and quality will not be an issue next year.

Now that the harvest is complete, farmers will be able to complete fall chores such as repairing fences, moving livestock, hauling grain and bales, picking rocks and other miscellaneous field work. Farmers will continue to do their work in the field until the ground freezes or a heavy snowfall occurs.

This is the final crop report for the 2022 growing season.

Harvesting is complete in the region and overall the harvest season was very good as the weather was favorable and there were no major delays. Early season moisture coupled with timely rains resulted in good yields and quality. Growers are busy applying fall fertilizers because they have adequate soil moisture, unlike central and southern regions.

Crop yields have been very good in the region with all crops estimated to yield above average, some growers say it was the perfect year on their farm which is a real positive after a season also terrible in 2021. Crop quality in the region remains strong as well, with all crops largely graded in the top two tiers, there have been some minor downgrades due to ergot and other grain diseases .

Due to increased rainfall, hay yields have greatly improved this season and producers have not had to worry about sourcing off-farm feed. Average dryland hay yields are reported (in tons per acre) as follows: alfalfa 2; alfalfa/brome 1.8; other tame hay 1.5; wild hay 1.3 and green fodder 3.5. At present, most livestock producers have indicated that they will have enough surplus hay, straw, green fodder and feed grains before winter, with only a few producers expecting a slight shortage. supply of animal feed.

Although soil moisture is not completely depleted, winter grain area is expected to decline further in the region. Winter wheat acreage is estimated to have declined by 19%, while fall rye acreage has fallen by 25%.

Growers have completed their harvesting operations and overall they report that it was a very good year. Early season moisture gave crops a good start to growth, and timely rains allowed them to properly fill their pods and seed heads, increasing yield potential. The harvest season has been very dry, growers have been able to work on their crop quickly as they are now concentrating on other field work until the ground freezes.

Crop yields have improved significantly this year compared to 2021, with all crops estimated to yield above average. Of course, yields vary within the region, and those who didn’t get the necessary moisture throughout the growing season saw more disappointing yields, but still much better than in 2021. Quality Crop performance also improved this year, with crops generally in the top two grades, there were slight downgrading issues due to ergot in the grain or bleached grain.

Greater amounts of precipitation have resulted in a better hay harvest for many producers in the region, the increased precipitation has also allowed for longer grazing periods on pasture and less pressure to supplement feed. Average dryland hay yields are reported (in tons per acre) as follows: alfalfa 1.4; alfalfa/brome 1.5; other tame hay 1; wild hay 1.2 and green fodder 2. At present, most ranchers have indicated that they will have sufficient or excess supplies of hay, straw, green fodder and feed grains before winter.

Crop journalists reported that the number of acres seeded to winter wheat and fall rye are down 20% and 32% respectively due to increasingly dry soils.

Call for artistic creations by people with disabilities