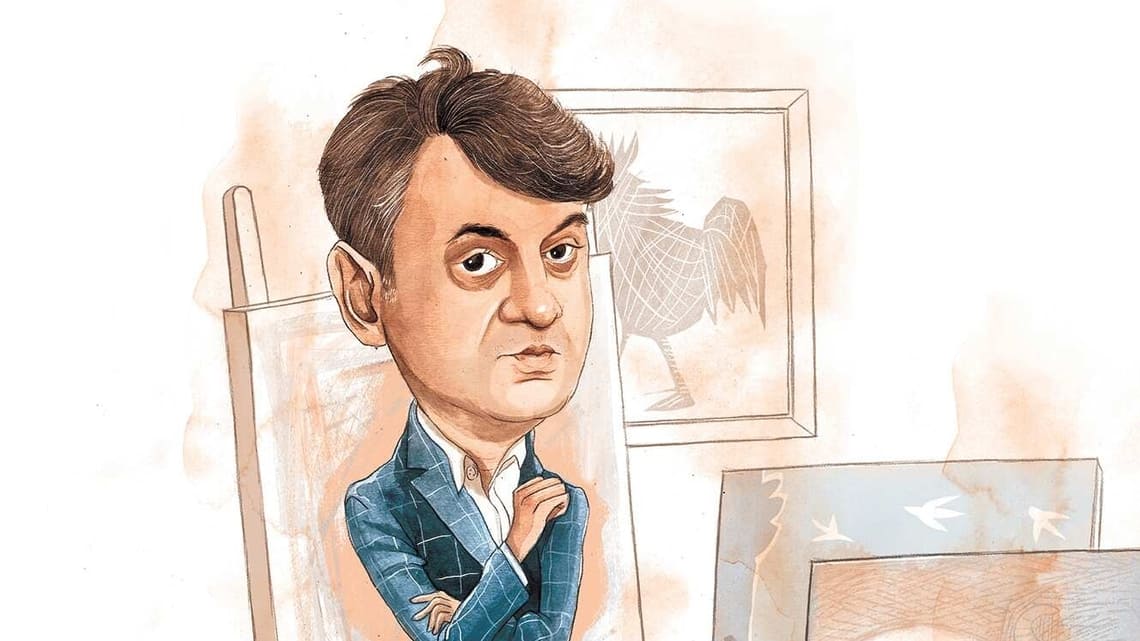 In March, Ashish Anand, CEO and Managing Director of DAG, staged one of its most ambitious exhibitions to date. Title Iconic masterpieces of modern Indian art, the exhibition, held in the gallery’s two new spaces at the Taj Mahal Palace Hotel, Mumbai, showcased 50 rare works by 50 artists spanning 200 years. It offered a series of firsts. It was the first time, for example, that Western orientalists such as Marius Bauer shared a space with Indian masters such as FN Souza and Ramkinkar Baij. Masterpieces were on display such as an 1805 Company painting of Agra Fort; The poet, a cement sculpture by Baij hailed as the first modern Indian sculpture; and Souza’s Assis Nude On A Blue Armchair.

Anand was looking for a new space after the Kala Ghoda gallery’s lease ended in 2020. “We looked for a long time. However, we couldn’t find a space as good as those in Delhi at The Claridges and Janpath. For the works of great masters, large locations are needed. And the Taj Mahal Palace offered exactly that,” says Anand, 51.

The roots of the DAG were sown in the 1980s, when Anand’s family moved from Amritsar, Punjab, to Delhi during that state’s militancy phase. His mother, Rama, who had a keen interest in the arts, opened the gallery – then called the Delhi Art Gallery – in the village of Hauz Khas in 1993. Anand, who had dropped out of secondary school and was working in ready-to-wear, took over in 1996. Today, the arts organization – renamed DAG – has galleries in Delhi, Mumbai and New York, a strong publications division, numerous museum collaborations and a partnership recently concluded public-private in the form of the Drishyakala Museum in Red Fort, Delhi.

The early years were difficult for Anand, who had no previous experience in the arts. A 2018 QG The article notes that he realized early on that while the wealthy wanted art, there was no infrastructure to meet that demand. However, bridging this gap has not been easy. Anand had to train his own eye first. “The first years were exciting. I traveled the country far and wide to build the collection. It may sound cliché to say that I led a nomadic life, but that’s what it was: traveling about 25 days a month,” he recalls.

His plan, even at first, was to focus on the underrepresented – the masters of modern Indian art – who for various reasons had not gotten their due. “I systematically set out to research and collect them with a view to creating the long-awaited market for them,” says Anand. While buying the work of lesser-known artists has become common business practice for galleries today, that was not the case when Anand started.

At the time, the market was limited, and we were only talking about 10 to 15 artists. Its focus continues to be the underrepresented artist; he buys the work of those whom he believes have contributed greatly to Indian modernism but have not been promoted. His first purchase was a “delicious” watercolor painting by Ramkinkar Baij in 1996. He was so excited at the time that he boarded a train from Puri, Odisha, to Howrah Station in Kolkata, with the work under the arm, to celebrate. At another time, he finalized a deal for some works by Asit Haldar although he was suffering from a high fever at the time.

Also Read: Why Titan’s Doctor Travels to a Small Indian Town by Train

“Right from the start, I decided never to take on consignment work, which in 1996 was the norm. My friends and family warned me of the risk, but I was convinced not only of the depth of the Indian market, but also of DAG’s ability to build a qualitative collection,” says Anand.

Over the years, it has acquired rare works by Chittaprosad as well as the studio of filmmaker Nemai Ghosh, while building up a significant collection of Nandalal Bose. He feels proud to have highlighted masters such as Chittaprosad and Rabin Mondal through large-scale retrospectives and in-depth publications. “MV Dhurandhar is another example. We exhibited our collection at the National Gallery of Modern Art in Mumbai in 2018, when the artist was little known.

An analysis of the values ​​the artist commands on the auction market today will tell you how recognized Dhurandhar is today,” he adds. This has also contributed to the international recognition of some of these artists. For example, Chittaprosad, which documented the Great Bengal Famine of 1943-44 in harrowing sketches and drawings, has been exhibited at documenta in Berlin and the Great Hunger Museum of Ireland in the United States. Mondal opened to rave reviews in Shanghai, China.

Data on the size of the Indian market remains poor, perhaps because it is still so small compared to more mature arts ecosystems in the US, UK and China. However, it is full of opportunities waiting to be realized. “In this space, we believe DAG has become associated with quality and value. As a result, our buyers can be found all over the world, sometimes in the most surprising places. ‘among them tend to be located in metros, some also come from small provincial areas,’ he says.

Internationally, New York remains an important outpost, with buyers also based in London, Hong Kong, Dubai and other places with large Indian diasporas. “DAG has grown steadily over the past few years, with the gallery showing robust growth of 35% compounded over the past two years,” adds Anand. The targeted interest comes from a mature age group, between 45 and 65, but there has been a steady trend of millennials entering the market. This bodes well for the art industry as a whole. Anand calls DAG a “very large company in terms of personnel”, with more than 160 employees. “That’s a lot for an arts institution. At the rate we’re growing, we’ll be a 450-person company by the end of next year,” he says.

In the space in which DAG works, progressives – Souza, SH Raza, MF Husain as core members and associate artists such as Tyeb Mehta, VS Gaitonde, Akbar Padamsee, Ram Kumar and Krishen Khanna – hold the market share the highest. “While they have achieved the highest prices and continue to do so, we are now seeing significant interest in what have been termed ‘second tier’ artists, such as MV Dhurandhar, GR Santosh, Avinash Chandra , KS Kulkarni. There has also been a resurgence of pre-moderns, such as Jamini Roy, Raja Ravi Varma, the first school in Bengal, all of whom are emerging as market leaders,” says Anand.

Also read: Uniphore’s Umesh Sachdev is in the business of conversations

Although the gallery has focused on 20th century Indian art since its inception, this is starting to change. Over the past five years, DAG has brought to light 18th and 19th century art – including works by visiting European artists and Company paintings – that have not had their due. “In doing so, our view of 20th century art will in no way be compromised,” he says. Some of the recent exhibitions of art from this period have focused, for example, on works by Balthazar Solvyns and paintings by the Bird Company of India. A clear demarcation can be seen in the galleries themselves, with Claridges focusing on this period.

Anand now wants to create more engagement and bring the art to more people. Museum projects are moving in this direction. Take, for example, India’s first public-private collaboration in the arts, which began in January 2019 with the Drishyakala Museum. Located within the grounds of the Red Fort, a Unesco World Heritage monument, the project was a partnership between the Archaeological Survey of India and DAG.

Drishyakala, which closed on April 13, featured four exhibitions that included a comprehensive overview of the nine Indian artists in the National Treasure as well as the first viewing of the 144 complete works of 18th-century aquatints by Thomas Daniell and William Daniell. “I would say it is the most successful public-private partnership in the field of art and culture. People from all walks of life have visited Drishyakala and been blown away. Before covid-19, we received an average of 4,000 people a day,” says Anand.

In 2019, DAG entered into a partnership with the Union Ministry of Textiles to establish a museum just outside Varanasi, Uttar Pradesh. The rotating exhibit was titled Eternal Benares. In 2020, he organized Ghare Baire, several exhibits on 19th and 20th century Bengal art, in the renovated Currency Building in Kolkata. He went on hiatus in November 2021, hoping to return with new perspectives. Anand hopes for partnerships in Tier 2 cities, not only for DAG but for other private arts institutions.

Also read: For Fabindia’s Dipali Patwa, business is all about craftsmanship

“DAG’s long-term perspective of democratizing art will remain at the forefront of its activities, be it historical conservation exercises, its education initiatives for school and college students, from its tactile programming for the visually impaired, its publishing and filmmaking programs, a lively lineup of lectures and organized walks, and the building of relationships with institutions and museums around the world,” explains Anand.

Over the past five years, he has tried to balance the commercial with non-commercial ventures, such as collaborations with museums and charity auctions. “Having the commercial arm subsidize the non-commercial is a vision DAG is moving toward,” he adds. Over the past year, the DAG team has been working on a new website that will host not only content, but also online auctions. With this, DAG’s auction arm hopes to get into 20th century art at lower prices, pegged at one lakh upwards. “It will bring this period of art to a wider audience. We made a few such sales during the pandemic, which were a huge success,” says Anand.

In-depth publications are also a priority area. These have been in English, but the plan is to venture into Indian languages ​​as well. Workshops are planned to use art as therapy for the elderly, defense personnel, sex workers. “These are not typical buyers. For them, we want to use art to heal. We will do this much more aggressively in the future,” he says.

‘Lost Illusions’ is a lavish period piece about the lure of fame, followers and fake news