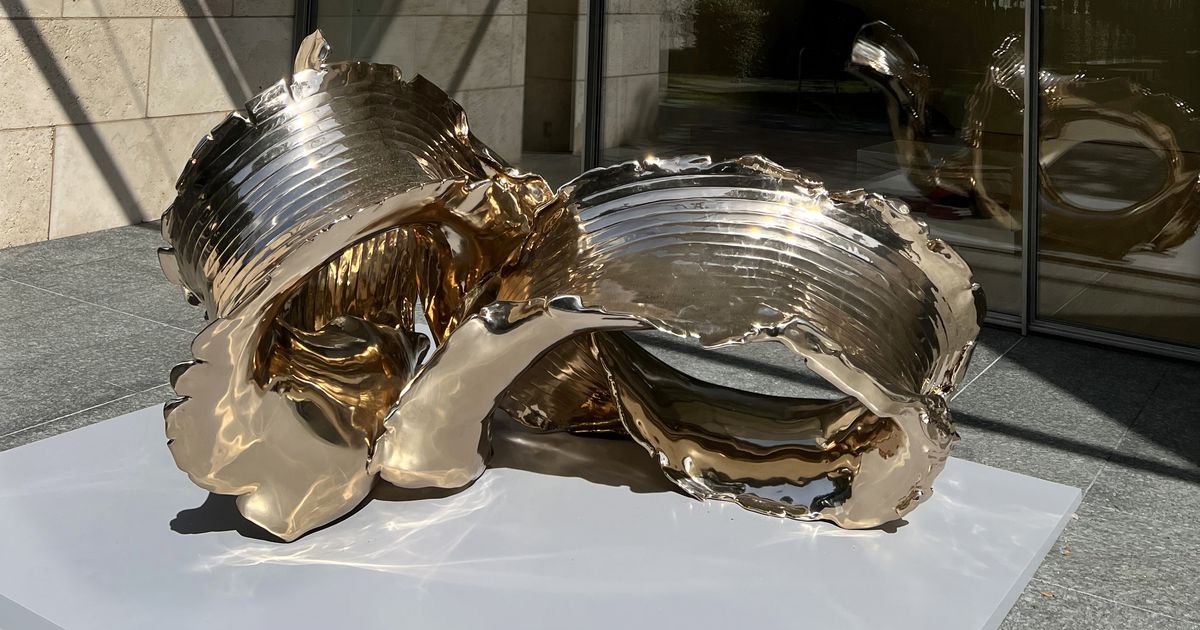 ‘Lynda Benglis’ at Nasher presents a titan of modern art

Lynda Benglis, grande dame of postwar American art, is one of the most important artists working today, with a career that spans more than five decades.

She was recently in Dallas to install and present a new exhibit, simply titled “Lynda Benglis,” at the Nasher Sculpture Center. It is a presentation of three distinct bodies of work spread throughout the venue.

Benglis, at 80, remains a playful figure who lives up to her reputation as a pioneering, provocative and iconoclastic feminist.

By the 1960s, a sculpture-based art form known as minimalism had supplanted a style of painting called abstract expressionism, at the time still predominantly dominated by male artists. Benglis’ response to this was a body of work known as the “Fallen Paintings” in which she poured pigmented latex in a range of colors onto the floor of the gallery.

These pieces were a radical expression of how painting had literally ‘fallen’ as the dominant medium of advanced art, and also how inappropriate minimalism was for her as a female artist at that time. His poured paintings were the antithesis of minimalism, in that they offered a shapeless, colorful frenzy of irregular shapes that resisted definitions and clear formulas.

These pieces were so visually striking that a particularly large piece, Smuggling (1969), proved threatening to curators at the Whitney Museum of American Art. At the time, they were worried it would distract from the rest of the pieces on display in a new exhibit, so they moved it out of the main gallery into an atrium.

Perhaps seeing this slight as an exclusionary strategy, Benglis decided to retire the track altogether. Poetic justice was finally served after some 40 years when the Whitney bought the piece in 2008.

Not only experimental with technique, Benglis was also curious about materials and soon began working with cast polyurethane which she shaped into sculptures of greater volume and physical presence. Eventually she cast these pieces in lead and, more recently, in bronze as in Quartered Meteor, visible in the main gallery. His interest in the casting of materials and the flow of material over cantilevered structures informs his creative process.

From the beginning, it always begins with “an attempt to reach below the surface”, that is, the surface of the water or the ground. This engagement with the primordial matter aligns perfectly with the themes of feminine identity, gender individuation and personal agency.

In the 1980s, she channeled this interest in water and cantilevering into a series of fountains, the most recent of which were specifically executed for this exhibition. Set in the reflecting pool of the Nasher Garden are three imposing fountains titled Prime, Amber Waves and fruity airplane.

Each identical fountain is approximately 25 feet tall. The fountains are installed at alternating angles so that the water falls in different directions. Benglis’ interest in organic forms is firmly in play in texture and surfaces, and in the way the fountains interact with the natural world. Their height relates beautifully to the trees around them.

On the other hand, the most intimate pieces of the exhibition are installed in the gallery of the foyer: five wall sculptures simply designated as works in mesh, paper and sequins that Benglis calls “bodies”. Twisting and twisting shapes that reveal the underlying process of their making with exposed wire and paper are alive with color and appealing to the eye.

In perhaps the most ambitious pieces, tower of power (2019) and yellow tail (2020), Benglis oversees the making of bronze enlargements based on a glazed ceramic series called elephant necklace. These freestanding sculptures are polished to a high shine; their planes twist and intertwine like floating sheets of metallic ribbon.

Completely different from the other two works presented here, they illustrate that Benglis is still full of surprises as she continues to reinvent sculptural practice as we understand it today.