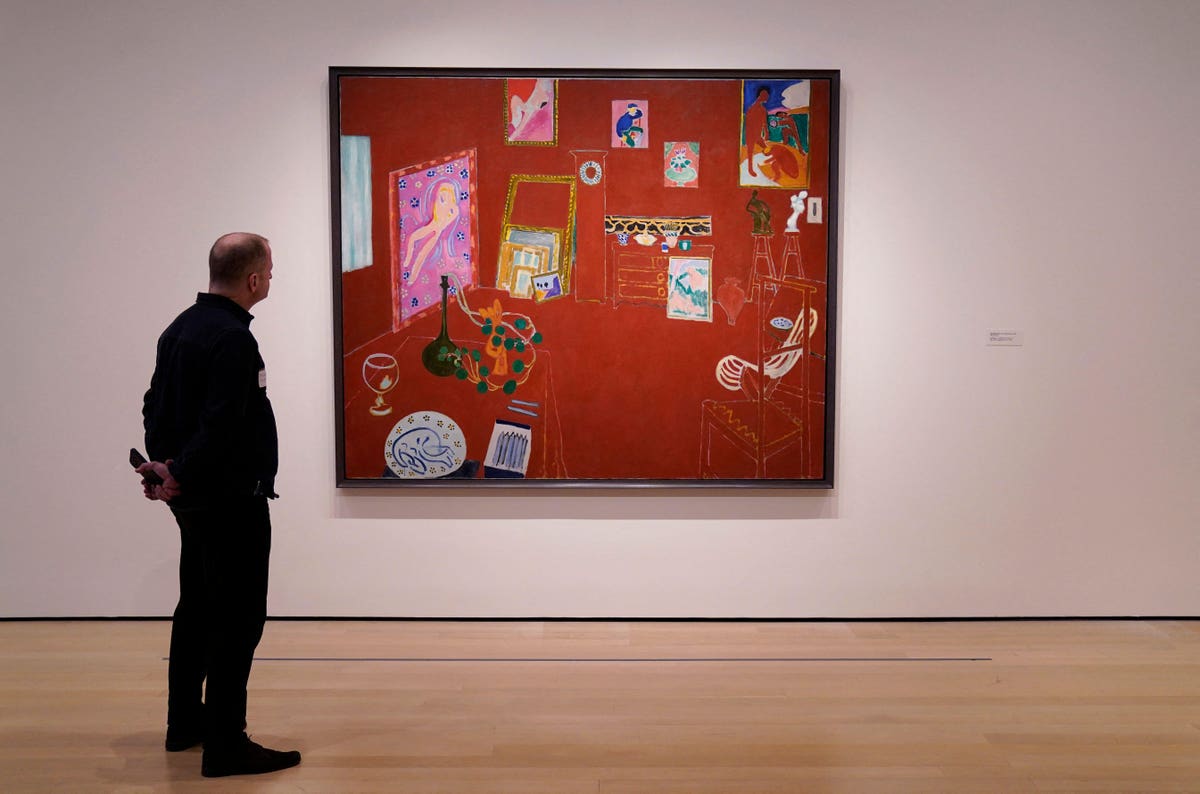 Matisse’s Red Studio at the Museum of Modern Art

On a recent trip to New York and its summer environs, I was struck by what was somewhat of a small exhibition centered around a single, fairly well-known painting that is over 110 years old and has been part of a a museum collection. for more than 75 years: Matisse, the red studio which is visible until September 10, 2022.

The red studio is an iconic work by Matisse: the large painting (6′ X 7′) is imbued with a warm clay red that I associate with Mediterranean climates and which evokes the Fauvist use of color. However, Tthe Red Studio leaves Fauvism behind for a distorted and flattened perspective that includes studio furniture as well as several works, sculptures, and a ceramic, rendered with the simplified line that would be Matisse’s late-career signature. In this way, The Red Studio is a pivotal work in the artist’s career, as well as in the history of art itself, as it represents a departure and a new direction.

What the MoMa has cleverly done is dub an iconic painting from its own collection and build an exhibition around it. So, for example, there are artifacts surrounding the construction of the studio, with correspondence between Matisse and the architects and engineers regarding dimensions – and photos of it from different perspectives. The exhibition also brings together the six paintings, three sculptures and a ceramic that remain in the large painting.

What’s funny about this exhibition is that it feels like a detective story or an archaeological dig – we’re looking for history and the works that belong to that history.

Looking at the painting today, one is drawn to its alluring beauty as the painting itself seems emblematic of Matisse’s work. However, when the painting was first shown, it did not attract attention. Here is what the MoMa says about this work: “For many years after its creation, the work of Henri Matisse The red studio (1911) – which depicts the artist’s workspace in the Parisian suburb of Issy-les-Moulineaux – was met with bewilderment or indifference. Today it is known as a seminal work of modern art and a landmark in the centuries-old tradition of studio painting.

The red studio was originally commissioned by Sergei Shchukin, a Russian textile magnate who was one of Matisse’s patrons, for his Moscow home. However, after Shchukin received the painting in 1911, he rejected it. It was eventually purchased in 1927 by David Tennant and hung at the Gargoyle Club, a literary club in London before being purchased by the Museum of Modern Art in 1949.

The idea of ​​a painting that presents other paintings was not new. We see examples of this from the Renaissance, in paintings from the Academy, or from galleries, even from the workshops of other artists. However, what Matisse did was impose his own signature – among them the radical flatness his work would later be known for as well as a distorted perspective of the room. In particular, the left corner of the room disappears while the table in the foreground juts out at an impossible angle; while the chairs on the right are rendered to give depth to an extremely flat painting.

Like the cubism of Picasso and Braque there is an analytical decomposition of depth and perception but here it is not intellectual and cold; like the fauvists and the expressionists, the red of the workshop conveys emotion. Like surrealists such as Dali, Matisse tries to convey the subjective and psychological feeling of an environment. Finally, like abstract artists such as Kandinsky, we see a push towards decorative abstraction – which Matisse would never fully embrace or reject entirely.

Instead, The Red Studio is a manifesto claiming that what matters most to Matisse is what happens in his studio. It is a landscape of his own invention, of creativity, of emotion expressed in decorative patterns and colors where the studio is a receptacle for the works on which he works. Like a prima ballerina, Matisse pleads to work very hard to make what we see easy. Matisse invites us to jump into this world – if you look closely, he left two colored pencils on a table as an invitation to creativity.

The works of art that feature in The Red Studio will, over time, take on a life of their own. Even the Venetian red used by Matisse would appear in another major painting, “Large Red Interior” (1948). which is on display at MoMa; and red itself would go on to influence painters such as Rothko and Barnett Newman.

Too often, one runs through the MoMa in a hurry to see Art’s greatest hits and absorb any new exhibits on display. The Red Studio reminds us of everything we can see in a single painting.

Watch: Menstrual pain simulator at Kochi mall proves unbearable for some, eye-opening for others