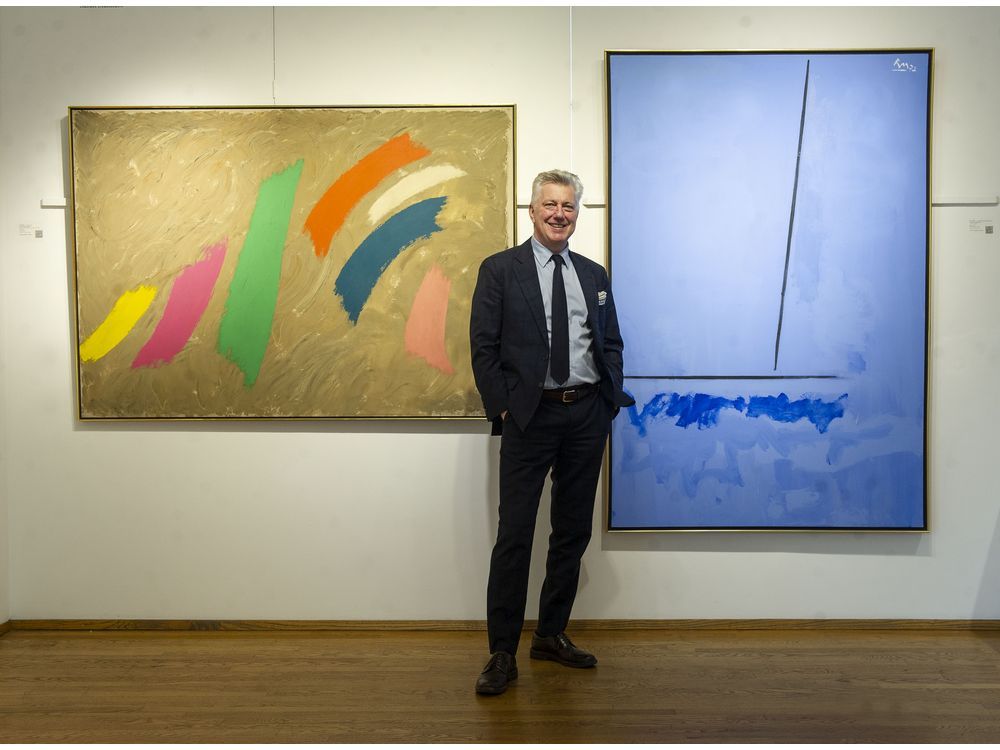 But he was stunned when he walked into Joan Stewart Clarke’s late home in West Vancouver.

“Kate (Galicz) and I went home, and we were stunned,” he said with a laugh. “Our eyes (bulging) wide open. We were quite surprised that the paintings are here.

The paintings were from an international modern art collection few people were aware of, apart from his friends and family.

The Showstopper of the collection is a six by four foot wide work by American Robert Motherwell.

“Motherwell is one of the giants of modern American art,” says Heffel. “He was one of the youngest members of what is called the New York School in the 1950s, along with Jackson Pollock, Willem de Kooning and Mark Rothko. »

August Sea #5 is a blue acrylic painting with some charcoal strokes, from what is called Motherwell’s ‘post-painterly abstraction’ period. It will be on sale at Heffel Art Auction June 1and has a pre-auction estimate of $2-2.5 million.

Motherwell is exposed to an overview of sales on April 25 at Heffel Gallery at 2247 Granville Street.

Six J agoJean-Paul Riopelle abstract paintings from the auction, including the 1953 title Sans, which pops placed against a Type Seven blue wall group in the front room of the Heffel Gallery. It carries an estimate before the auction of 1 million to 1.5 million.

“Typical Riopelle, you have almost every color under the rainbow (in the paint),” said David Heffel, who runs the auction with his brother. “But the blues really come as stronger pigment,” especially against the blue wall.

There is also a striking 1929 Lawrence Harris sketch deep blue mountains illuminated by shafts of light from above. The small oil on board is called Mountain Sketch, and an estimated 500,000 to $ 700,000.

“This is a blockbuster,” Mr. David Heffel said. “There is a canvas for this purpose in the Thomson Collection at the AGO (Art Gallery of Ontario). It is interesting with the spheres of light, although it is much more geometric “.

There is also a 1935 Emily Carr oil, Singing Trees ($500,000 to $700,000), which Gerta Moray eloquently describes in the catalog: “two young fir trees fizz energetically against the swirling stream of a dark forest. It’s in the downstairs gallery in Heffel, behind one of Klee Wyck Carr’s largest and finest ceramic sculptures, Orca Platter ($10,000 to $15,000).

The tray has a native motif of a killer whale in gray, black and orange with a green and black. Carr manufactured ceramics to sell to tourists when money was scarce. The original owner of the plateau, Kate Mather, who ran a gift shop in Banff, Carr encouraged to start making pottery.

Clarke assembled her collection in Toronto in the 1970s and 1980s. She was formerly married to Thomas Alexander Rigby, owner of Ripley’s Believe It or Not! before Jimmy Pattison.

She moved to West Van with her second husband, Larry Clarke, the founding president of Spar Aerospace, which built the famous Canadarm, a robotic arm used in space.

“She was one of the first modern art collectors in Canada in the 1970s,” said Robert Heffel. “It was a fantastic eye.”

More news, less ads: Our in-depth journalism is possible thanks to the support of our subscribers. For just $3.50 a week, you can get unlimited, lightweight access to the Vancouver Sun, The Province, National Post and 13 other Canadian news sites. Support us by subscribing today: The Vancouver Sun | Province.

Sign up to receive daily news from the Vancouver Sun, a division of Postmedia Network Inc.

Thank you for your registration!

A welcome email is on its way. If you don’t see it, please check your spam folder.

The next issue of Vancouver Sun Headline News will soon be in your inbox.

We encountered a problem during your registration. Try Again