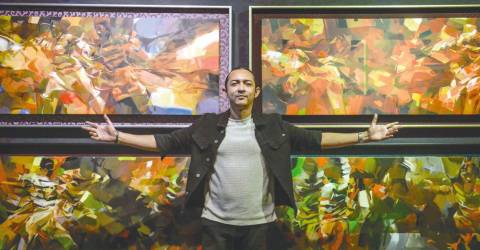 Painter in search of creating a genre of modern Malaysian art

FOR an artist, each brushstroke is the representation of an expression. For Ali Nurazmal Yusoff, he must also be an agent of change.

He is looking for a path to a Malaysian version of “modern art”.

According to Ali, for too long the creators of modern art here have mostly traced the path of its European masters. That, he says, must change.

“We need to reshape Malaysian modern art, give it its own identity.”

He took the first step by emphasizing Malaysian identity in his works, most of which reflect the patriotism, local culture and quirks of the average Malaysian.

“Since we don’t have a heritage of our own, Malaysian artists tend to follow the path set by their Western counterparts.”

“As a result, our basic knowledge of art is based on the Western style. We have been following in their footsteps for far too long.

He said Malaysian artists should do more to not only improve on what they have acquired from Western art, but also to shape an identity for local modern art.

In his own way, Ali mixes the abstract with the real to spark conversation among those who watch his creations.

“If it doesn’t trigger emotion, it’s not art.”

Ali has won many admirers and among them is Defense Minister Datuk Seri Hishammuddin Hussein, in whose office one of his masterpieces takes center stage.

He said that for Hishammuddin’s artwork, he focused on what he called an “interchangeable puzzle”.

“It’s an abstract piece, but if you put it together it becomes an image,” he said, adding that the work has created a buzz among art buyers in the international market.

Ali is looking to expand beyond Malaysia but has been held back by the Covid-19 pandemic, so for now he is focusing on promoting his works locally.

“I believe that the change I advocate should start somewhere. My next project is to show what I can do on my own.

His next exhibition, which will be held in July and will be called Orijimal, will present works inspired by his first foray into the art scene.

“Orijimal” is an amalgamation of the word “original” and his middle name, and has been his signature since he took his first steps into the art world.

Ali hopes to stage three installments of the show in different locations. The first will take place in his studio in Putra Heights, the second in a gallery and the third at the Sime Darby Convention Center in Petaling Jaya.

He also considers himself a performer and plans to spice up his first show with a monologue.

“It’s not easy being an artist during a pandemic. I have to use everything I can and adapt to change.

“I’m doing something different this time, I’m inviting my audience to participate in my painting session on social media platforms. I want to involve them to demonstrate the process of creating my pieces.

Ali added that being an artist today comes with many challenges.

“We need to exercise self-discipline, take our thinking process to the next level, and we need to have a strong sense of entrepreneurship.

“We need to work on using the resources we have rather than depending on others. We must know how to create our own opportunities rather than waiting for one.

The general strike in modern art

Protected period: outside quarantine and subsequent voluntary stay due to Covid-19 infection