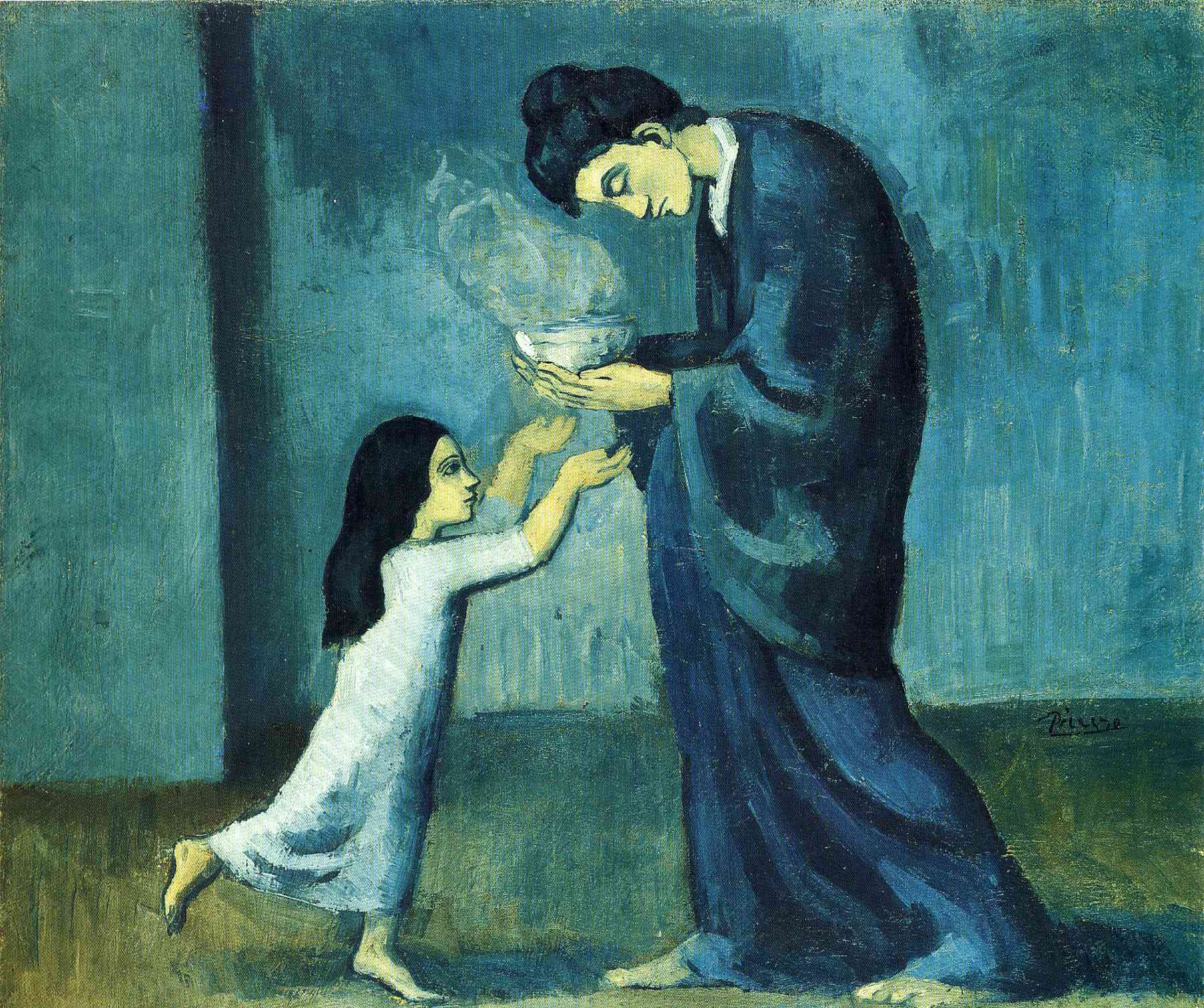 The strong should go ahead and take what they want: such a quasi-Nietzschean maxim is dynamite in the head of an impressionable youth, and that’s what Pablo Picasso (1881-1973) probably heard in his late teens. Living in Barcelona, ​​Spain’s most cosmopolitan city, the teenage student-painter frequented a circle of avant-garde artists and writers who gathered at a local tavern, Els Quatre Gats (The four cats). Picasso’s biographer John Richardson argues that the young Pablo absorbed Nietzschean ideas about the exalted role of the artist with consequences that would astound the European art world.

In 1907, Picasso painted his groundbreaking “Les Demoiselles d’Avignon”, placing himself at the top of the line as a leader of modernity in Europe. But that would only happen after he fiercely absorbed, digested, and then competed with the artists he encountered on the walls of museums and galleries. The list includes famous names – Degas, Van Gogh, Toulouse-Lautrec, Rodin – and many lesser known ones. Along the grueling road to early stardom, he faced venereal disease, poverty, depression, and guilt over a friend’s suicide. Not surprisingly, another principle he borrowed from the author of The birth of tragedy was “All art is born of suffering”.

As the comprehensive and brilliantly curated exhibition tells us Picasso: Painting the Blue Period (1901-1904) at the Phillips Collection in Washington, DC, ending June 12, many other forces shaped the artist’s early style. With nearly 90 works, including paintings, drawings and sculptures by Picasso and his influencers, as well as videos and elaborate wall texts explaining what lies beneath some of the images, it’s a rare opportunity to see how the most influential artist of the 20th century evolved into “Les Demoiselles”. The exhibition revolves around three paintings: “Blue Room” by Phillips (1901), “Crouching Beggar Woman” (1902) from the Art Gallery of Ontario and “The Soup” (1903). As a coda, there is an additional gallery devoted to works from the Rose Period (1905-6), his next style, which offers colorful views of circus performers and monumental female nudes.

In Charles Baudelaire’s seminal 1860 essay, “The Painter of Modern Life”, the poet urges contemporary French artists to turn away from classical beauty, “the eternal and the immutable”, and seek the beauty of “the ephemeral, the fugitive, the contingent” all around them in urban life. Manet and the group of painters who would be called Impressionists took this advice and sought out new styles and techniques to capture new subjects. Edgar Degas and Henri Toulouse-Lautrec, who influenced Picasso early on, were two of the greatest painters of modern life.For them, this meant the sleazy nightlife of cafes, salons and brothels.Pablo, 20, looks forward to taste these urban pleasures and to paint them by settling in a studio on boulevard de Clichy, near the famous Moulin Rouge, at the foot of the Butte in Montmartre 1901. The exhibition opens with a selection of works colorful and vividly painted representing performers and prostitutes he knew well. The erotic Picasso is honored in these first two galleries.

A shocking event occurred earlier this year that had a devastating effect on Picasso and his art. His close friend and sometimes housemate, painter and writer Carles Casagamas, committed suicide by shooting himself in the head in a Paris cafe in front of his friends. Pablo was back in Spain at the time to study El Greco’s work in Toledo. He painted several tributes to his friend, including a large and complex canvas, “Evocation (The Burial of Casagemas)”. In the lower half, a group of mourners dressed in blue stand around the white-wrapped corpse in a group similar to scenes in Lamentation. But then three half-naked prostitutes welcome the dead man mounted on a white horse into a distinctly ungodly paradise in the upper part. Picasso based his composition on one of El Greco’s famous two-tiered altarpieces, “The Burial of the Count of Orgaz” (1586), taking what he needed and going his own irreverent way.

In “The Blue Room”, one of the treasures of the Phillips Collection, Picasso focuses on a naked young woman washing alone in a room. Its elongated and elegant body derives from El Greco. The voyeuristic vision derives from Degas’ keyhole portraits of bathing women. Yet there is a profound pathos in the posture of the young woman – derived from Auguste Rodin’s statue of the fallen Eve – suggesting her vulnerability and resigned melancholy. The poster “May Milton” by Toulouse-Lautrec on the back wall underlines the fundamental importance of this French artist, who died a few weeks earlier from alcoholism and syphilis. Picasso brings together four influences in a complex but entirely successful and deliciously captivating painting.

Commuting between Barcelona and Paris, the painter suffers from depression and sees eros turn into pathos. His attention turned from the seductions of the two cities to the plight of their despised and neglected inhabitants. One explanation for this change was that Picasso had contracted an STD. Her doctor worked at the prison at Saint-Lazare Women’s Hospital near Montmartre, where prostitutes who had broken the law or were ill languished in prison. The doctor, passionate about art, allows Picasso to study and draw women. The painter later acknowledged that their fate was an impetus for the Blue Period. Picasso painted these women as isolated, pensive figures in a monochromatic way to make his audience feel the cold plight of these marginalized women.

Yet, as Richardson’s biography and catalog suggest, there was more to Picasso’s art of this period. His upbringing and training in Catholic Spain filled his imagination with dying saints, martyrs and sacred personages. The artist had a photographic memory, so it is possible that these images proved impossible to deny. During his residency in Barcelona, ​​he drew on the Christian pictorial tradition for a predominantly Spanish audience. Spanish paintings from the Golden Age of the Suffering Virgin echo in many of the works in the exhibition. Picasso secularized Christian imagery to heighten respect and empathy for the unfortunate homeless women and men of both cities. Blue was the traditional color of the Virgin’s robe. 16th-century artist Luis de Morales’s ‘Our Lady of Sorrows’ hangs on the wall next to Picasso’s ‘The Crouching Beggar’. The similarities in posture and dress reverberate.

In 1903 Picasso produced what may look like a simple painting of a mother bending down to offer her child a bowl of food, but the exhibition reveals the sophistication beneath the surface of “The Soup”. The painter began making sketches for the work while still in Barcelona. He returns to Paris for an exhibition, but his images of joyless women do not sell. He was often broke and couldn’t even afford canvases, so he tightened his belt and drew on scraps of paper or cardboard instead.

The work of two artists, Honoré Daumier and Pierre Puvis de Chavannes, became his inspiration. Daumier was a realist, sympathetically portraying the urban poor. The starting point is his watercolor of a mother at the table fiercely sipping her food while nursing her child. The almost forgotten Puvis de Chavannes painted large civic murals in a classical style. Picasso studied and drew figures from the murals of Sainte-Geneviève, now located in the Panthéon, and “Charité” in the town hall, depicting angels of mercy feeding the hungry during a siege of the city in times of war.

The fascinating sketches on display show how hard he worked on the composition. The mother of “La Soupe” is not Daumier’s fat plebeian but an elegant reclining angel. Chavannes’ style helped him monumentalize Daumier’s subject matter, becoming an allegory for the moral virtue of charity.

The painter understood Nietzsche’s maxim that the strong take what they want artistically. Heapplied this principle with increasing insight and evolving technique throughout the four years of the Blue Period, absorbing the work of other artists and then transcending them in a way suited to his inclinations, abilities and circumstances.