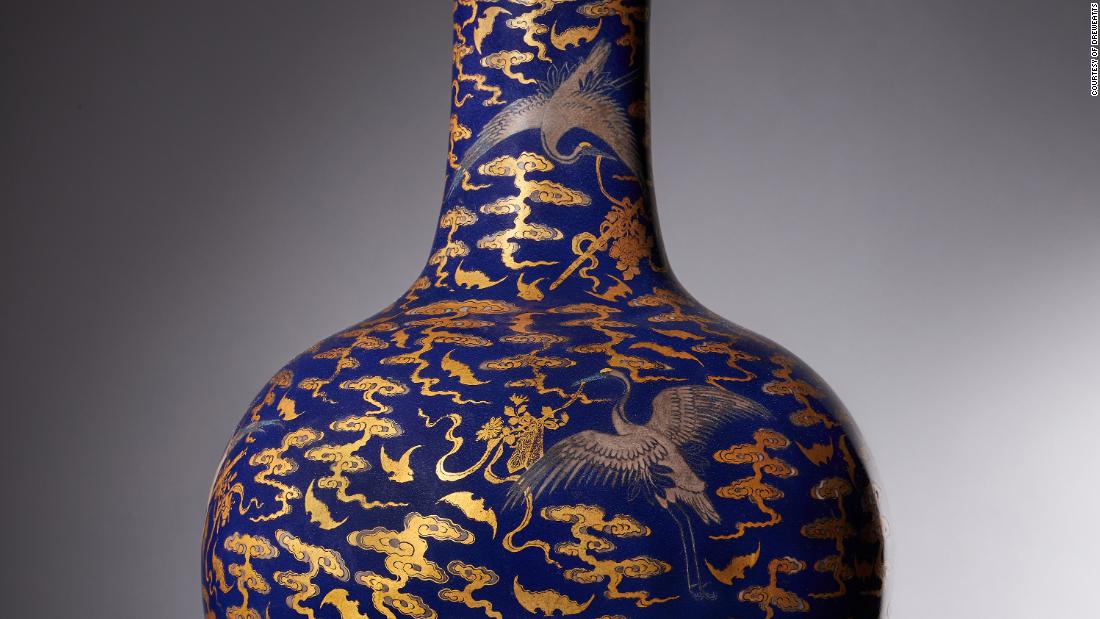 Qianlong period vase found in kitchen could be worth up to $186,000

A vase kept in a kitchen in England could sell for £150,000 ($186,000) after it was revealed to be a rare 18th-century Chinese artifact created for Emperor Qianlong.

The vase was bought by a surgeon in the 1980s for a few hundred pounds, according to UK-based auction house Dreweatts, which is handling the sale later this month. The surgeon then passed it on to his son who, not realizing its value, kept it in the kitchen.

Standing two feet tall with a striking palette of gold and silver on a bright blue background, the vase bears the distinctive six-character mark of the Qianlong period (1736-1795) on its base, Dreweatts, Berkshire , in the south of England, said in a press release.

The vase bears the distinctive six-character mark of the Qianlong period (1736-1795) on its base. Credit: Courtesy of Dreweatts

“Findings like this are very rare in the life of an appraiser,” Mark Newstead, a consultant specializing in Asian ceramics and artwork at Dreweatts, told CNN on Thursday.

Newstead said he first saw the vase when he, his wife and another couple were invited to lunch at a friend’s house in the late 1990s. The vase was in an alcove set back from the kitchen table.

“It had great light and beautiful decoration, and although at the time my main area of ​​expertise was European ceramics, I had an overwhelming feeling that it was 18th century and something very good”, added Newstead.

It was not until he visited the house again a few years later that Newstead saw that the vase had been moved to a much safer place on a large mahogany sideboard in the drawing room. He then looked at it more closely and thought it was Qianlong. However, the vase remained where it was for another 20 years.

The auction house said it was extremely rare to see blue vases painted in both gilt and slightly raised silver, believed to be because the medium is difficult to control.

“The exceptional quality, monumental size and commanding presence of this vase, together with its fine and auspicious decoration, would have made it suitable for prominent display in one of the halls of the Qing Palace,” added Drewatts.

This is not the first time that a valuable object has been found in the house.

A 13th-century painting by Cimabue, which sold for $26.8 million in 2019, was discovered hanging in a French kitchen.
And a 400-year-old painting found by accident in 2014 in an attic when homeowners wanted to fix a leaky roof was valued at $136 million.