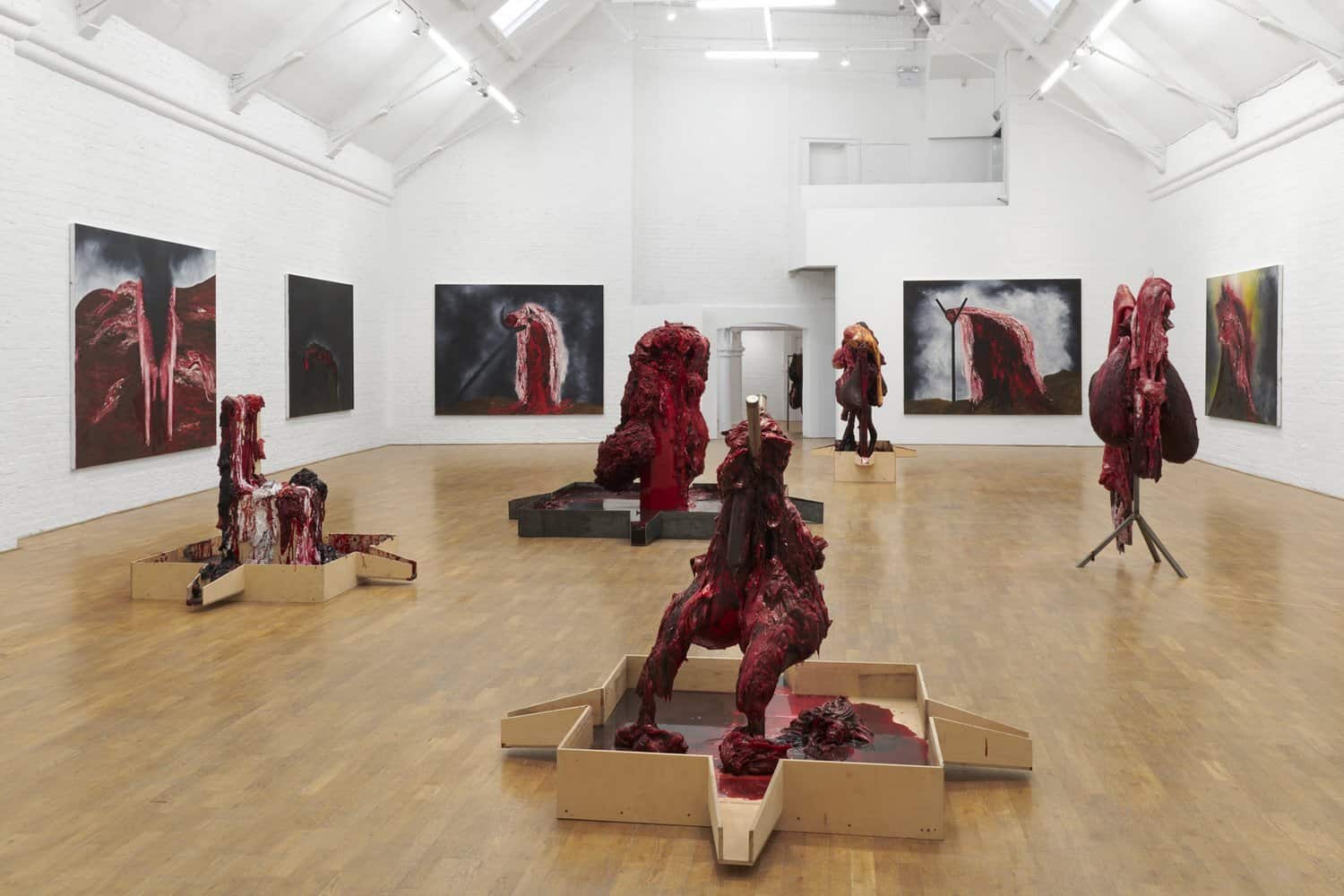 A giant red globe hangs above a clinical metal tray with spouts to allow red liquid to drain. It’s like I’m in a slaughterhouse looking at the aftermath, but I feel like a drop of paint could fall from the sculpture at any time and if I was allowed to put my hand against it, I could detect a weak heartbeat. I also want to run my fingers through the liquid, but maybe that’s just my macabre taste.

Best known for his sculpture, here is Anish Kapoor showcasing his paintings – although, as we can see in the work I have described, he does not let go of those sculptural roots and his obsession with reading primary colors continues. throughout this exhibition.

It is these installation works that are the strongest works of this show because they take control of the space. There are others with wooden bases that look too much like works of art – unlike their metal companions which make you forget that what we are looking at is paint and not bleeding entities.

Around these central works are the paintings and they seem to be the less attractive cousins â€‹â€‹of his central works. That’s not to say they’re not eye-catching as what looks like volcanic eruptions and in others, it’s like they’re splashed with flesh and blood. Even if they try, they just don’t elicit the visceral reactions I get from his facilities. Kapoor refers to Titian when talking about his work, but these remind me more of John Martin’s apocalyptic hellish landscapes.

The paintings on the wall are a reminder that at the end of the day this is an exhibition of his paintings and that even the central works are covered in paint, and it is the texture that they get from the paint that they get. makes it so impactful.

One of the small sculptural works, although still as large as I am, appears to have two wings. It is as if an angel had been flayed and what was left of it was exposed. It’s at its most macabre and death-obsessed when Anish Kapoor is at his best in this show, I just wish the death toll was a bit higher.

Anish Kapoor: The painting is on view at Modern Art Oxford until February 13. Tickets are Â£ 7.50 for adults. Photo: Ben Westoby.

Art critic for FAD and Londonist. See as many exhibits as possible and write reviews, opinion pieces and a weekly top 5 for FAD.

Six shows to see in the heart of the West End, from sculpture to photography.

Mix it up with mixed results in a new exhibition at the Hayward Gallery.

The Huxley-Parlor Gallery has just launched fourbythree, a new initiative that will recognize four emerging artists for a fully funded exhibition in the gallery’s project space in London’s West End. Huxley-Parlor will grant each artist Â£ 5,000, out of their annual profits, to carry out their exhibition.