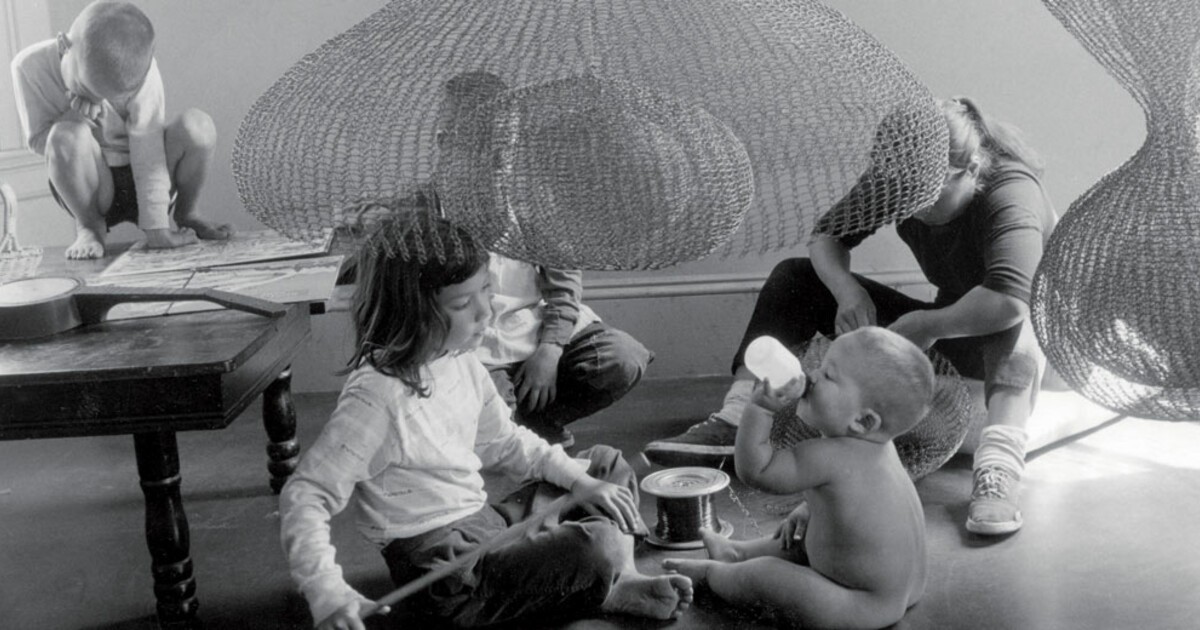 Owriting ofRuth Asawa’s first solo exhibition in New York in 1954, critic Parker Tyler described her sculptures as inviting the viewer “to be as still as they are or to tremble when they tremble”. It responded to what had become its signature: biomorphic shapes woven from industrial wire, suspended from the ceiling like lanterns. The first of these exhibited at the Modern Art Oxford retrospective (until August 21), the Untitled S.052, was made in 1965, the year MAO opened. It hangs at the top of the stairs in the main gallery; eighteen other wire sculptures hang within, some tall and close together, like drifts of towering poppies, while others – smaller, spikier – float alone.

Asawa first experimented with metal shapes in the summer of 1947, after seeing a Mexican artisan from Toluca make baskets to store eggs. She liked the simplicity of the looped line, and yarn was cheap and plentiful in an age when art materials were scarce. Her parents had emigrated from Japan to the United States, and Asawa was born (as Aiko) in 1926 in Norwalk, California, the fourth of seven children. They worked on the family farm every day after school, growing vegetables to sell at the local market.

Asawa and her children photographed by Imogen Cunningham in 1957.

Their lives were turned upside down in February 1942 when Roosevelt issued Executive Order 9066, which authorized the incarceration of 120,000 Japanese Americans on the West Coast. (The word “internment” is common but misleading, since two-thirds of those detained were U.S. citizens like Asawa and none were convicted of espionage or sabotage.) FBI agents arrested his father, Umakichi , who was sent to New Mexico; In April, Asawa was taken, along with her mother and five of her siblings, to Santa Anita Racetrack in Arcadia, just outside Los Angeles, where they were housed in converted stables. “The smell of horse dung never left the premises,” she later wrote. MAO curators show this difficult period in the second room of the exhibition, which contains a poster from May 1942 with “instructions to all people of Japanese descent” to report to a civilian checkpoint, and a display case featuring Asawa’s relocation. Official identity card, with a photo of her aged seventeen. The camp was also the place of an improbable initiation. Other inmates included three Disney illustrators – Tom Okamoto, Ben Tanaka and Chris Ishii – who taught art in the stands of the old racetrack.

These classes inspired Asawa to apply to Milwaukee State Teachers’ College, and in 1943 she was granted leave from the War Relocation Authority to train there as an art teacher. She left without a degree after learning that she could not complete her final internship due to anti-Japanese sentiment. A classmate, Elaine Schmitt, encouraged Asawa to join her at Black Mountain College, where she spent the summer of 1946, earning a scholarship to stay for three more years. The college’s experimental environment provided “enough stimulation”, she later wrote, “to last me the rest of my life”. It also brought her a boy from Georgia called Albert Lanier, who arrived on the GI Bill to study architecture in the fall of 1947 and offered her less than a year.

Asawa and Lanier decided to move to San Francisco in 1949 after hearing that you could get a five-course Italian meal in North Beach for 75 cents (it turned out to be untrue). Albert got a job at an architecture firm and they had six children in nine years – Xavier, Aiko, Hudson, Adam, Addie and Paul. Asawa found a way to work alongside them, as illustrated by photographer Imogen Cunningham in a series of portraits. The two women had been introduced by Cunningham’s son, Rondall, in 1950, and remained friends and collaborators until his death in 1976. In a 1957 image, Cunningham shows Asawa absorbed in her work while her children play around from her – one of her sons. crouched on a table, her head bowed in a studious imitation of her mother, while two older children sat on the floor beside her. A naked baby feeds from a bottle of milk. Partly obscuring the family scene are two looming sculptures.

“I like to be surprised by a nectarine that isn’t a nectarine anymore,” Asawa said of her attraction to certain organic shapes. “I like the nectarine, the apricot being assembled.” She has fond memories of her childhood on the farm. Reflecting Black Mountain’s multidisciplinary philosophy, the final room of the exhibition showcases his drawings, paintings, prints and drawings. Natural forms rendered in one medium often fuel another: the skeleton of a desert plant given to him by a friend sparked a spiky, wall-mounted, ‘wire’ sculpture, a simplified work in ink on paper, and a large-scale mosaic for public commission.

Asawa’s attraction to natural geometries was partly influenced by Buckminster Fuller, who joined the Black Mountain faculty in 1948 with, as she put it, “his magical world of mathematical models packed into a plastic trailer. aluminum”. Asawa took his architecture and industrial engineering classes and watched him build the first of his geodesic domes (he liked to hang students from the ceiling to demonstrate his resilience). Her most intricate wire-frame constructions, such as the untitled seven-lobe sculpture in MAO’s first room, which she gave to Fuller in 1961, she considered sculptural expressions of her belief in fundamental interconnectedness. of life on “spacecraft Earth”.

citizen of the universe is the first museum exhibition of Asawa’s work outside the United States (it will travel to the Stavanger Art Museum in Norway in the fall), but it has not been overlooked at home. A print she made using cascading lines of “BMC” laundry pads became the cover of Black Mountain’s official 1949 brochure, and later a fabric and wallpaper design; she exhibited all her life, with her first museum exhibition in 1960 and her first retrospective in 1973; and the inaugural issue of art forum asserted that his “economically declared works are certainly among the most original and satisfying new sculptures to have come into being in the western United States”. In 1982, San Francisco established a “Ruth Asawa Day”.

If his work was admired, however, it sometimes cost his philosophy dearly. Asawa’s statements about the therapeutic nature of creating art are generally glossed over by curators, as is the closeness of his work to traditional craftsmanship. In contrast, the MAO exhibition bases the sculptures on his larger practice and principles. She didn’t consider herself an activist – although involved in many campaigns, she preferred to “work on an idea” – but the serenity of her works was not meant to be appreciated from one moment to the next. their achievement. In 1963, during a visit to C&M Plating Works (the company that cleaned and oxidized his carvings), Asawa noticed the inlaid copper bars used to smooth out small imperfections in car bumpers. She asked if it would be possible to reverse the electroplating process to make new growth appear on her copper wire sculptures. The platers complied and the idea led to a short series (small examples are included in the show), which demonstrates his enthusiasm for the process and the calligraphic force of his ideas, traced from dry cactus and pare. -chrome shocks with a masterful and spectral sculpture.