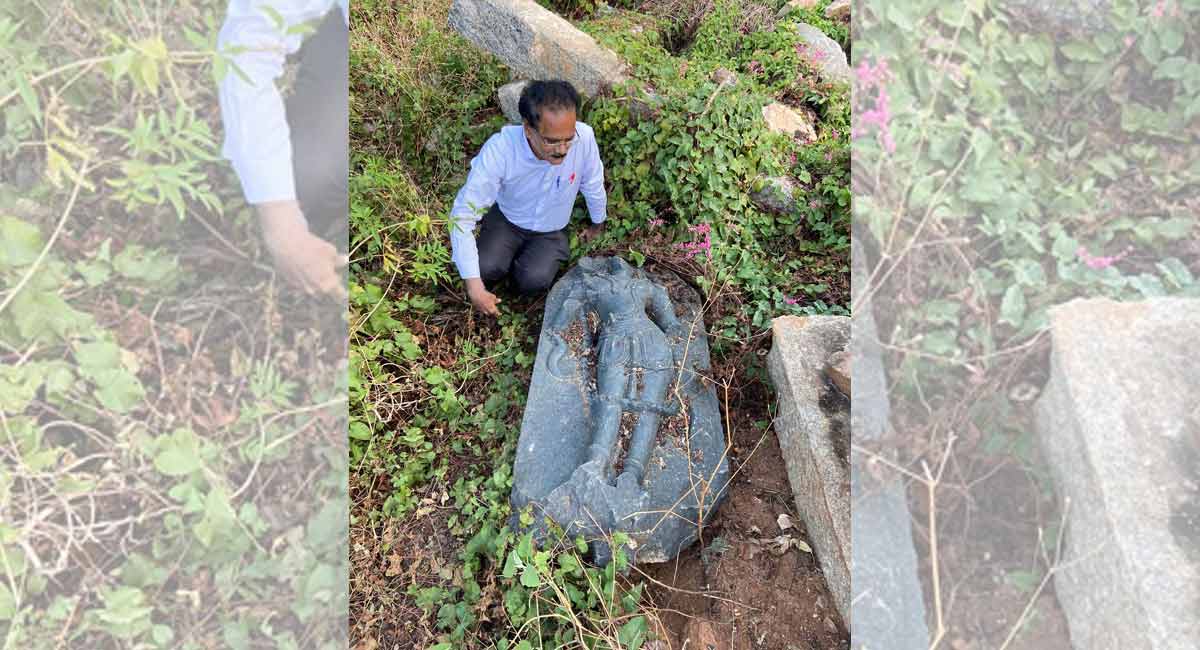 Sculptures from the Kakatiya period found at Umamaheswaram in Nagarkurnool

Nagarkurnool: Two beautiful sculptures from the Kakatiya period have been found abandoned among the bushes of the famous Shiva temple at Umamaheswaram in Nagarkurnool district.

A life-size sculpture of Siva and a Nandi idol carved from black basalt stone were spotted by archaeologist Dr. E. Sivanagireddy during his explorations near the Anjaneya temple at the foot of the hill on Tuesday as part of of the heritage awareness program called “Preserving Heritage for Posterity”.

The Saivite sculpture according to him is broken at the head and hands and at the head and left leg of the bull sculpture but decorated with rich ornamentation representing the artistic dexterity of Kakatiya art which flourished in the 14th century AD.

According to Sriramoju Haragopal, organizer, Kotta Telangana Charitra Brindam, the mutilated saivite sculpture depicts Veerabhadra based on the style of art and iconography and a similar find he noticed at Devaracharla in Nalgonda district of the same period.

Besides citing a reference to an inscription of the last ruler of Kakatiya, Prataparudra dated 1320 AD was found inside the temple which records the donation of land in 16 villages for the upkeep of the Umamaheswara temple which attests Kakatiya’s patronage.

Dr Sivanagireddy revealed that a 14th century inscription at Umamaheswaram records the installation of the carvings of Parvati, Chennakesava, Mahishamardhini, Veerabhadra and Nandikeswara (bull) by a certain Sadananda Swamy and were carved by two sculptor brothers, namely China Sarabhayya and Peda Sarabhayya.

He said that the sculptures of Veerabhadra and Nandi found by him in the bushes
are none other than those mentioned in the above inscription and the other three sculptures, namely, Parvati, Chennakesava and Mahishamardhini are now seen inside the Mahamandapa of the Umamaheswara temple. It is discouraging to know from the local people that the two sculptures were deliberately put to sleep by the disbelievers. He also lamented the neglect of an inscription of chief Recharla Madanayaka dated to 1377 AD broken into four pieces and found strewn along the road at Anjaneya Temple.

Dr. Sivanagi Reddy sensitized the temple priests and the local community on the historical significance and archaeological significance of the carvings and appealed to the concerned authorities to preserve them for posterity by erecting them on pedestals under proper labelling.

You can now get handpicked stories from Telangana today to Telegram everyday. Click the link to subscribe.

Across the Spider-Verse will have new art styles