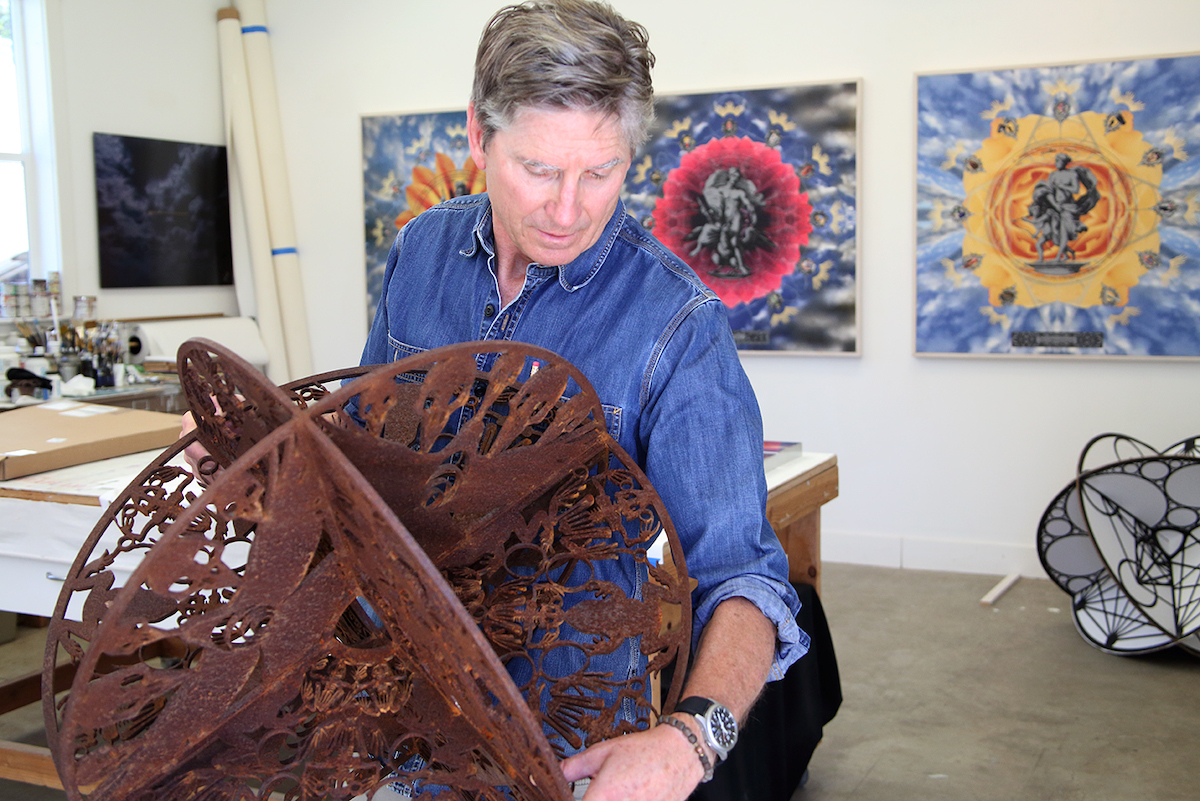 Images of his striking bronze sculptures — which stood in Sonoma Plaza as part of a collaborative installation between the Sonoma Valley Museum of Art and the City of Sonoma in 2021 — may come to mind. For those unfamiliar with him or his work, Hassen is a multimedia artist, whose art locates themes of science, nature and spirituality. From large-scale sculpture and painting to video and printmaking, Hassen’s work is an invitation to consider the human relationship with, well, everything else.

Luckily for those who love the art and nature of inquiry, Hassen has an upcoming solo exhibition, “Indicators: Nature in Flux,” opening September 17 at Modern Art West gallery in downtown Sonoma. .

“Indicators: nature in flux” features prints, mixed media and sculpture work, all of which explore themes such as speculative future outcomes based on the current climate crisis, the magnificent images of space captured by the James Webb Space Telescope, work inspired by the documentary by David Attenborough, A life on this planet, and more.

Viewers can mine Hassen’s work for insight into spirituality, scientific discoveries, cultural phenomena, and environmental observations.

I had the pleasure of meeting Hassen in 2021 during the installation of the aforementioned sculptures – at 5 a.m., put in place by giant cranes – and he struck me as a cool, kind man. Learning about his solo exhibition, I was delighted to get to know him more deeply. I urge readers to do the same and get to know the man behind the art before the show opens.

Who is Peter Hassen?

A native of Cincinnati, OH, Hassen graduated from the University of Colorado with a Bachelor of Fine Arts and a minor in Religious Studies. His involvement in conceptual and public art projects began in the 1990s and hasn’t stopped.

In recent years he has been a resident at the Voigt Family Sculpture Foundation and has presented his work at the Marin Civic Center, Bolinas Art Museum, Bedford Gallery, Marin Art and Garden Center, and AXIS Gallery.

Dedicated to exploring social and environmental circumstances in his work, Hassen creates to invite curiosity and spark thought. Inspired by street artists, he will place his work publicly in collaboration with a city or non-profit organization, and renegades will establish it in a wild place. The works are messages, intended to be seen by all.

Unbeknownst to me when we first met, I learned during this interview that Hassen has Parkinson’s disease, which has progressed over the past few years. For a man with such artistry and so much to express, the disease presents a poignant and pressing challenge.

“As Parkinson’s disease progresses, I find the nature of my making changes to incorporate more digital collage and large format printing. I find that I am in a race. Parkinson’s disease has the effect of preventing a person from expressing themselves, from “being” in the world. It stifles your voice, activity, desire, intellect, facial expressions, mobility, balance and more, essentially robbing you of your personality. My artistic creation is more important than ever as a personal expression of my life’s passion. I have to keep doing it – while I still can!”

Despite the increasingly present nature of his illness, Hassen’s work and Parkinson’s disease are distinct. While it affects him, it doesn’t define him, and his broader focus on humanity remains paramount. Hassen foresees that at some point Parkinson’s disease will physically inhibit him to a significant degree. But he remembers Matisse who, with crippling arthritis, continued to make art with only a pair of scissors.

“I wonder how I will be able to use a computer trackpad in the future?” he thought.

Hassen is greatly inspired by history in his work, citing one of his favorite quotes as “Be humble; many things happened before you were born. He sees great value in revisiting the historical narrative, eliminating accounts for obvious correlations between yesterday and today.

“History is a rich area for me, because even if it doesn’t repeat itself, it certainly rhymes,” Hassen said. “It’s hard not to see and tap into the stories.”

Hassen’s work over the past few years has been inspired by the current climate crisis. Needless to say, as I write this, we are in a dangerous heat wave. But rather than sow fear or add to the cacophony of distraught voices, Hassen seeks, with his artistry, to transform the obviously bad situation into a more complicated, multi-faceted one worth exploring.

In other words, rather than seeing humanity as a struggle with nature, Hassen invites us to see humanity as a participating part of nature. He seeks to create work that invites viewers to consider a more balanced perspective of themselves and their role – a yin and yang sense of our generative and destructive tendencies, as a species.

“The trick,” Hassen said, “is not to make it feel like it’s didactic, but to give the viewer enough clues to put the pieces together. We’re all adults here, and that’s It’s not my job to lead the viewer by the nose to a conclusion. I use layers of information that give hope and meaning, if one is willing to keep digging. I mostly use beauty as a tool – depicting beautiful flowers that are also medicinal, or using elemental and sacred geometry as a background motif, or creating a mesmerizing trellis pattern of frog skeletons or candy-colored climate gases.

Never pedantic, overly hopeful or overtly pessimistic, Hassen’s exhibition is a powerful entity. The rich history present, the layers of symbolism and the beauty with which each piece conveys its message, result in mysterious works of art that seem to be in a language we once knew but have forgotten. The work awakens a memory in us, shakes us and wakes us up.

“Hope is hard to peddle these days,” Hassen said. “And there are no easy answers. I hope the beauty of my work can inspire people to step out and start making this transformative change.

The Arab Museum of Modern Art presents four exhibitions, showcasing artists from across the region