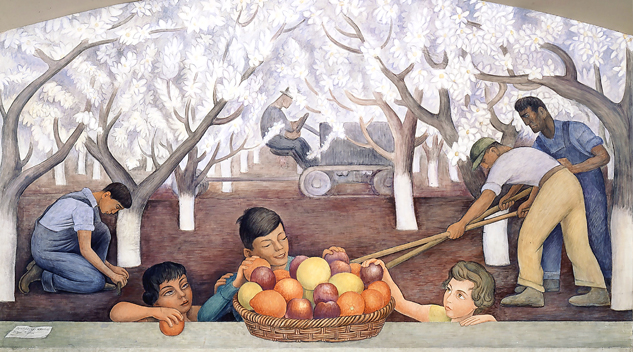 SAN FRANCISCO – It’s no exaggeration to say that San Francisco was Diego Rivera’s (Mexican, 1886-1957) “Golden Gate” to artistic success in the United States. But, as “Diego Rivera’s America,” the new exhibition at the San Francisco Museum of Modern Art (SFMOMA) shows, the United States was more than the place where Rivera executed some of his greatest murals and found some of its greatest patrons. Notice that I take care to say “United States” rather than “America”. This is because Rivera’s “America,” while living and working in the United States, took on a hemispheric meaning. His America was, or rather has become, Pan-American. “I mean by America,” he said, “the territory comprised between the two ice barriers of the two poles. A fig for your wire fences and border guards. Rivera’s Pan-America evolved over his years in the United States, born out of his lifelong idealization of the agricultural and industrial working class and his belief that art should not just celebrate the masses, it should be for the masses. He believed that society could be both prosperous and just – and that art was a key bridge to that end.

From 1907 to 1921, Rivera studied in Europe, Spain and France, where he met Picasso and fell under the spell of modernism and the avant-gardes, especially Cubism. At the same time, he is interested in Byzantine mosaics and classical and Renaissance frescoes. But post-revolutionary Mexico, in the person of the Minister of Public Education José Vasconcelos, called him back “to participate in the ‘decoration’ of the federal buildings then in progress, within the framework of an official project of unification of the nation after the Revolution. ”

Rivera’s belief in workers as a source of transformative power led him to turn from the confines of modernism to social realism and mural painting – both as an expression of that power and as a means for workers to to experience it as a civic art outside the more forbidding surroundings of scholarly museums and aristocratic galleries. Echoes of the rounded, solid figures of Renoir, Cézanne and Gauguin find their way into Rivera’s aesthetic, as do the figures of Picasso’s “blue period”. As with these painters, there is a classicism to Rivera’s figure work, an idealization perfectly suited to his allegorical intentions, even when it is clear that he is using specific people as models. However, Cubism is still a part of his practice, in the perspective-defying structure of his main murals and the more subtle ways he plays with it in his easel paintings. 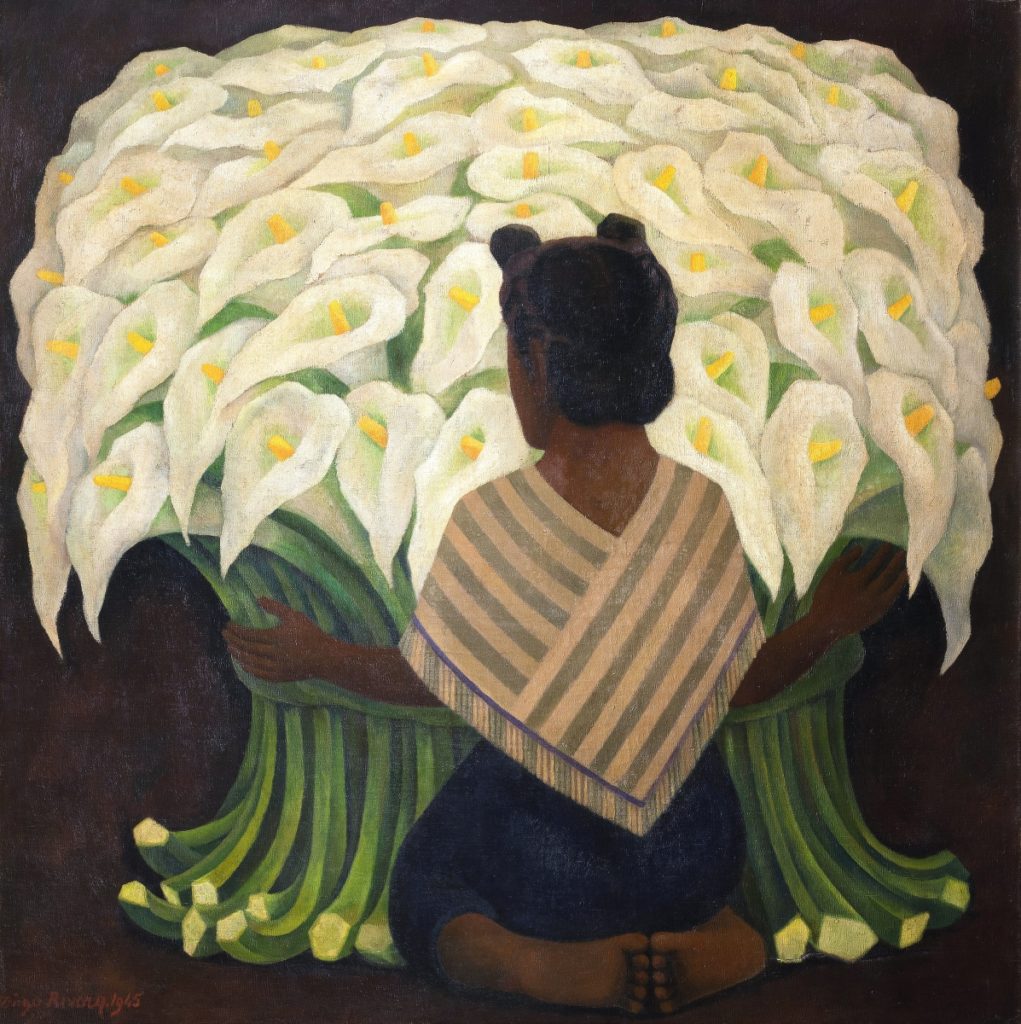 Upon returning from Europe, Rivera also turned away from Europe, seeking inspiration in the indigenous peoples and arts of Mexico and the Americas. During travels through Yucatan and especially Oaxaca, Rivera found the powerful matriarchs of the peninsula emblematic of traditional deities; these would become central to his work. As curator James Oles writes in his catalog essay, “From Murals to Paintings: Scenes of Everyday Life,” Rivera adopted “the powerful yet mythical figure of Tehuana, famed for her dominant role in the economy market hall and its distinctive costume: a long, brightly colored cotton skirt, usually trimmed with a white frill, and a short embroidered blouse (huipil).Reflecting centuries of cultural exchange, and actually more Victorian than Zapotec, the costume was nonetheless seen as preserving a deep indigenous presence – what Rivera called the region’s “classical past”. Her idealization of the Tehuana was part of a larger cultural phenomenon in which women from distant lands – Andalusia , Algeria, Tahiti – were recast and objectified by European artists, writers and intellectuals, almost always men. But for Rivera, these images of Tehuantepec also t served a nationalist project that quickly transformed the Tehuana from a local type into an enduring symbol of Mexican identity. (cat. p. 37)

Rhythms of work, ceremony, and the natural world, as well as plant metaphors dominate Rivera’s easel paintings and “portable frescoes.” Repeated postures, forms and a restrained palette express what he saw as the Aboriginal and chthonic origins of his Pan American art. In the late 1920s Rivera made his first visit to the Soviet Union. Subsequently, he will graft industrial work on forms of campesino. The factory workers in his paintings would be just as kinetic – but bluer, colder, more steely and more angular.

Rivera was an instant star in the United States – as was Frida Kahlo (Mexican, 1907-1954). Rivera’s and Kahlo’s destinies were linked then, even if their fame seems to be today. But where Rivera’s murals, which were meant to convey specific messages of progress and solidarity, required the patronage of the wealthy, Kahlo’s easel-sized digs into her psyche and background came closer to the modernism – in particular surrealism – and their very allusive and elusive character. , ensured their avant-garde look to collectors. 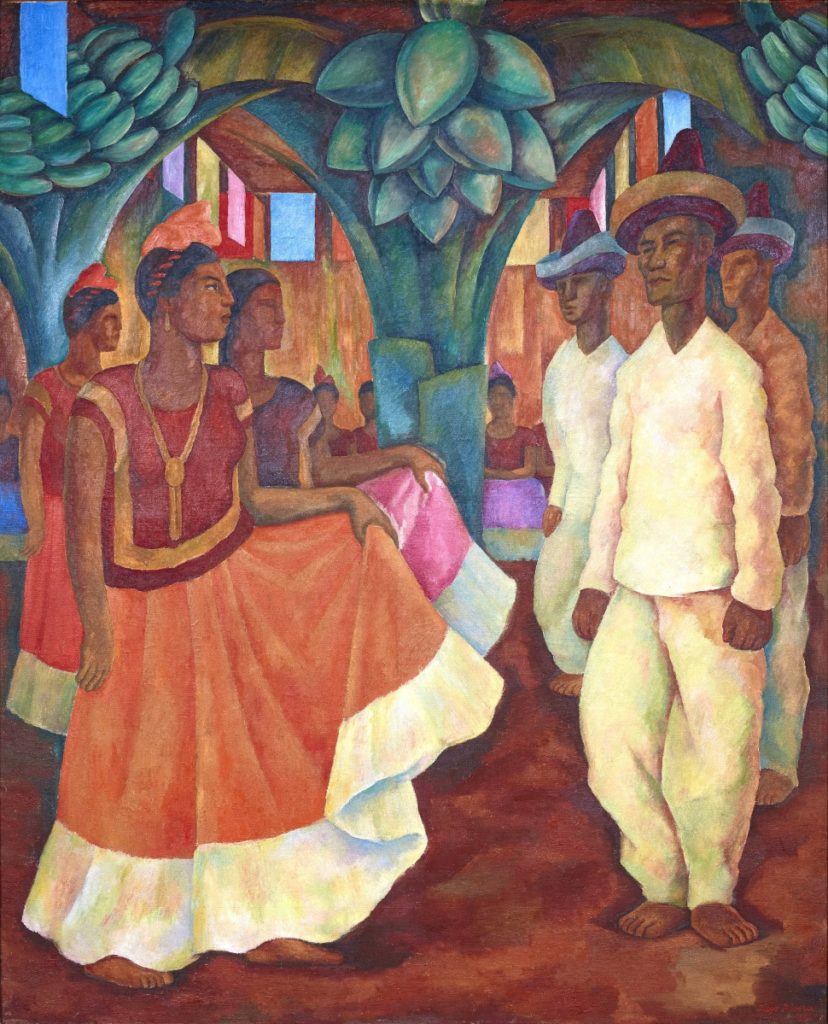 Nonetheless, in his public art, Rivera sought to express solidarity with the proletariat and to include critiques of capitalism and colonialism. This famously led to his dismissal from the commission to paint the murals for the new Rockefeller Center when he portrayed John D. Rockefeller as a top hat sybarite. At the same time, as Oles states, Rivera changed and appeased his politics in his gallery works: “Although many of Rivera’s paintings foreground the works of the working class, they generally avoid references to social conflict or radical politics. He understood that collectors and dealers in the United States preferred the tranquil images of traditional Mexico that could serve as antidotes to the stresses of the urban, industrial age, especially during the Depression. (cat. p. 36)

Yet Rivera enshrines his very politics in a mural for a private home in California. In “Still Life and Blossoming Almond Trees”, 1931, the grandchildren of the artist’s patrons, Sigmund and Rosalie Stern – who were already enthusiastic collectors of Rivera’s paintings – enjoy the fruits of the earth, while laborers Mexicans plow the ground and tend to the trees in the background. Yet these laborers are not only responsible for the bounty enjoyed by children, they are closer to the earth, under the magnificent umbrella of white almond blossoms. The Edenic framework honors and enshrines their work without overt reference to distinctions of race, nationality, or class.

By his devotion to the ideal, in paintings such as “La tortillera (The Tortilla Maker)” (1926); “La bordadora (The Embroiderer)” (1928); and “Weaving” (1936), Rivera avoids any trappings – and trappings – of the picturesque. Neither voyeuristic nor journalistic, these paintings, like “Still Life and Almond Blossoms”, sanctify the life and work of ordinary people, women in particular. In each painting there is a sense of traditional cultural practices – ways of life, we might say – continued and transmitted in an unbroken continuum. A collector might buy one and hang it on the wall for its apparent simplicity and generous beauty. But underlying these surfaces is the rhythm of deep time, time tied to the seasons and cycles of the natural world. It is a sound that many – if not most – spectators perceive dimly, marking time in a dance whose modernity excludes them. 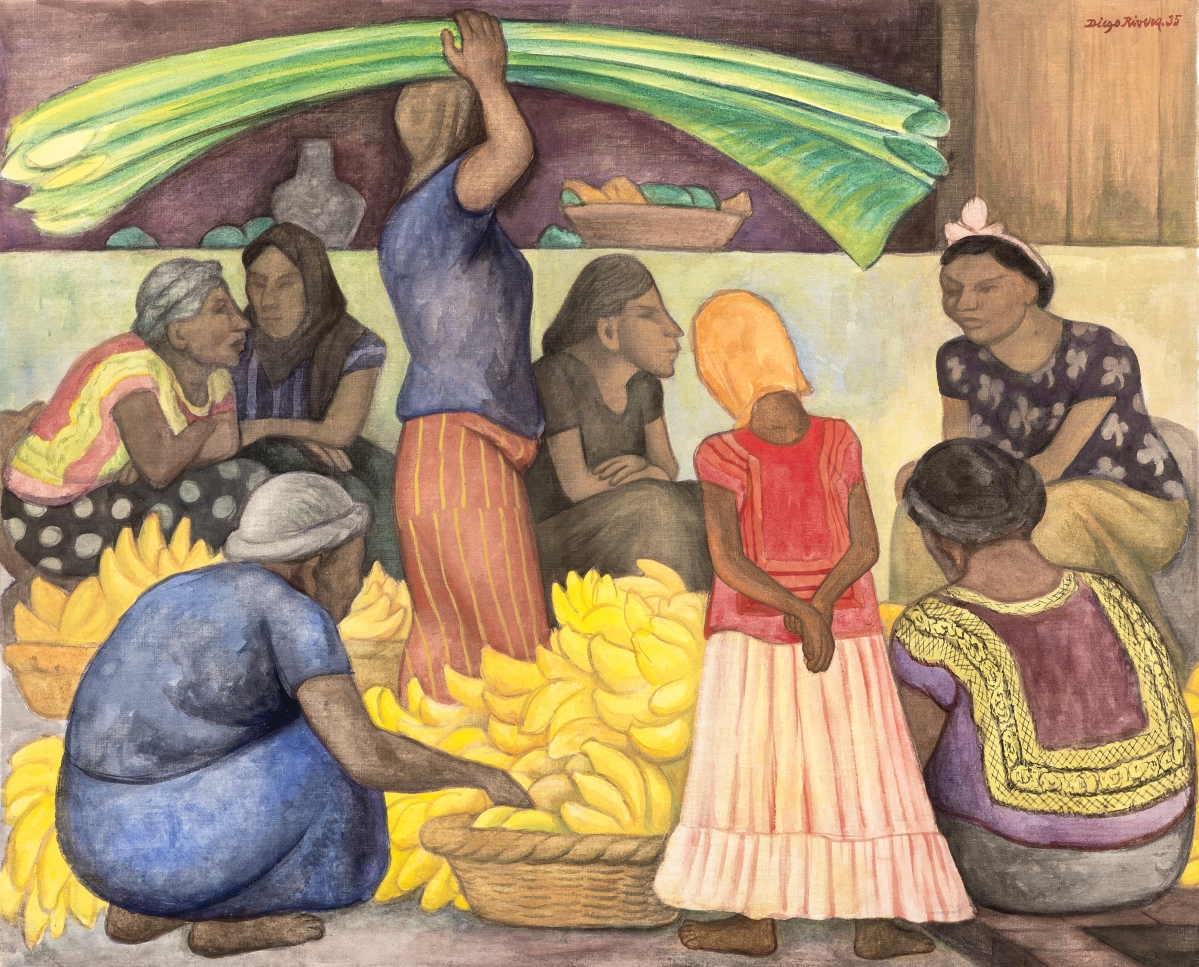 “Dance in Tehuantepec” (1928) and “Tehuanas in the Market” (1935) put us in the position of spectators eager to join the dance or break into the powerful circle of market women. But how can we? “What should we do?” Rivera seems to want us to ask ourselves the question. “What preconceptions should we give up? What philosophical upheavals would we have to undergo? Paintings make us want – and leave us wanting more.

Desire is so much part of the art; wanting to feel and share the rhythms of Rivera’s paintings goes a long way towards understanding his enduring appeal. Even in a work like the 1935 painting, “The Flower Bearer,” where a man kneeling under the weight of a basket of flowers is helped up by a woman, the struggle takes on a holy aspect. Rivera paints the cone-shaped flowers, filling them with a renoirish light and lightness, as if losing weight with each passing moment. The shape of the man’s yellow scarf merges directly into the shape of the woman’s light blue shawl, as if they were merging, becoming one, as if taking away some of the weight. The man’s palms, knees and legs grip the earth, but Rivera subtly distorts the perspective, tilting the picture plane, as if the earth itself is tilting to help him s raise. The pastels and earth tones that dominate the painting are reminiscent of Giotto’s frescoes in the Arena Chapel, and the way Rivera works edge to edge is reminiscent of classical friezes.

With the rise of fascism and the brief marriage of convenience between capitalism and communism versus fascism, Rivera seemed to see hope in the union of north and south in the western hemisphere, embracing a pan-Americanism in his thinking and his art. Calla lilies, for example, appear throughout Rivera’s career – they are a theme, a leitmotif of the generative power of nature. “Woman with the Calla Lillies,” painted in 1945 as World War II drew to a close, seems to go beyond earlier incarnations of the subject, however. Here, a kneeling woman kisses a wrapped bundle of calla lilies, an invigorating response to the bundle of dead sticks, the fasces, which the Axis powers have adopted as their symbol. It can be the world, suggests Rivera, all of us together. Yet they are cut flowers – the ends of the stems flank the woman’s feet – indicating the transience of the moment, that moment, when the world could truly be one. The woman, turned away, seems about to turn to us, but her gaze is something we may also have to earn.

Like all Camelots, the moment turned out to be short-lived. Rivera would live to see World War become Cold War and allies become enemies. But art always dreams, and the dreams of art are always worth remembering.

“Diego Rivera’s America” ​​will be on view at the San Francisco Museum of Modern Art through January 2.