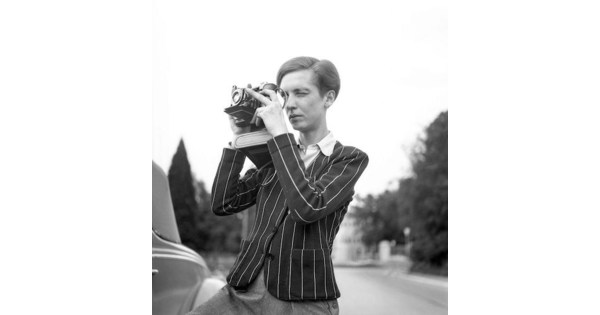 Schwarzenbach was born in 1908 into the wealthy Schwarzenbach-Wille family of Zürich industrialists and history graduates in Zürich and Paris. Because of her political and sexual orientation, she turned her back on her conservative family and forged ties with the German literary diaspora, especially with siblings. Klaus and Erika Mann. In 1931, she lived Berlin before passing, after the National Socialist seizure of power, to Spain, Russia and Iranwhere she publishes prose and journalistic writing.

Despite her years of struggling with drug addiction, during the 1930s Schwarzenbach professionalized herself as a travel and reporting journalist. On joint trips with writers and photographers such as Ella Maillart, Marianne Breslauer and Erika Mannshe turned to social and political subjects, including the rise of National Socialism, the labor movement in United States, the consequences of modernization and the role of women in society. His photographs, however, also reveal a longing for foreign lands and the poetry of travel. Some 300 articles by Schwarzenbach were published in Swiss magazines and newspapers during his lifetime. From 1933 these articles were increasingly accompanied by his own photos, although most of Schwarzenbach’s photographs remained unpublished before his death at the age of 34.

When her literary work was rediscovered in the 1980s, Schwarzenbach rose to fame as a writer, trailblazer and gay icon. Her fashion sense and lifestyle were the inspiration for At Clare Waight Keller Spring/summer 2019 line for the fashion house Givenchy.

It is only recently that Schwarzenbach’s contributions to photography have been recognized. His images and his writings are intertwined and document the upheavals, tensions and conflicts of the period leading up to the Second World War. Schwarzenbach’s photographs also convey private themes, such as life in exile, the search for identity, homosexuality, and the desire to transgress conventional gender roles. But above all, the photographs express Schwarzenbach’s unbridled passion for travel – and his search for encounters with the unknown, the “departure without destination” as an existential experience. The title of the exhibition “Départ sans destination” refers to the life of Annemarie Schwarzenbach, which is characterized by great restlessness, homelessness, uprooting, departure and a search for hope in foreign countries. These themes run like a common thread through his writings and his photographic work and link the work to the literary tradition of the modern era.

“Annemarie Schwarzenbach was multi-talented – as a writer, journalist and photographer – at a time when few women were represented in these fields,” said the executive director of the Bechtler Museum of Modern Art. Todd D. Smith. “The dialogue that develops between Schwarzenbach’s texts and photographs opens our eyes to the upheavals and conflicts of the 1930s. At the same time, Schwarzenbach’s documentary gaze explores themes in a poetic and surprisingly contemporary way.”

The exhibition is divided into six chapters presenting the work of Schwarzenbach. A love of Europe addresses by Annemarie Schwarzenbach early years as a photojournalist and his travels through Europerevealing Schwarzenbach’s cosmopolitan attitude. The Happy Valley follows Schwarzenbach’s famous road trips through the Middle East and Central Asia. She made four trips to TurkeyPalestine and Syria, Iraq and Iranand insofar as Afghanistan and India. She wrote her best-known literary work, The Happy Valleyin Iran. between continents presents intermediate places such as streets, ports or decks of ships which become the sites of a temporary community and the settings of farewells and new beginnings. Travels in America takes care of his travels United States in 1936-1938 where Schwarzenbach intensely engaged in a new understanding of politically engaged photography and encountered a society still deeply marked by the economic crisis after 1929. Unemployment, poverty, droughts, the decline of the cotton industry – his attention was centered on the American system and explores the differences between rich and poor, but also the widespread misery of the African-American population in the southern states. The New Earth discusses his ambivalent views on the relationship between nature and culture in the context of mechanization and industrialization. Minor encounterstells the stories of people she has met on her travels and offers a personal look at her circle of friends.

Annemarie Schwarzenbach: Departure Without Destination is supported by the Infusion funds and its generous donors, as well as the City of Charlotte and Foundation for the Carolinas. Additional sponsorship provided by Bellecapital, Brighthouse Financial and Truist with additional support provided by the North Carolina Arts Council and the Arts and Science Council.

About the Bechtler Museum of Modern Art

The Bechtler Museum of Modern Art is the only museum in the Southern United States exclusively dedicated to modern European and American art and its legacies. Capturing a remarkable era in the history of art from the Zurich-based Bechtler family collection, the collection of the Bechtler Museum of Modern Art includes works by some of the most important and influential figures of Modernism, including Alexander Calder, Le Corbusier, Edgar Degas, Max Ernst, Alberto Giacometti, Barbara Hepworth, Jasper Johns, Paul Klee, Alfred Manessier, Joan Miró, Kenneth Noland, Pablo Picasso, Bridget Riley, Nicolas de Staël, Andy Warhol and a host of other 20th century notables. The museum, designed by Swiss architect Mario Bootshighlights the iconic Niki de Saint Phalle The Great Firebird on the Ark at his entrance. Located in the heart of Uptown, the Bechtler is a bright community space created to inspire and engage new visitors and long-time supporters.

Museums and theaters are in a period of vaccine mandate adjustment