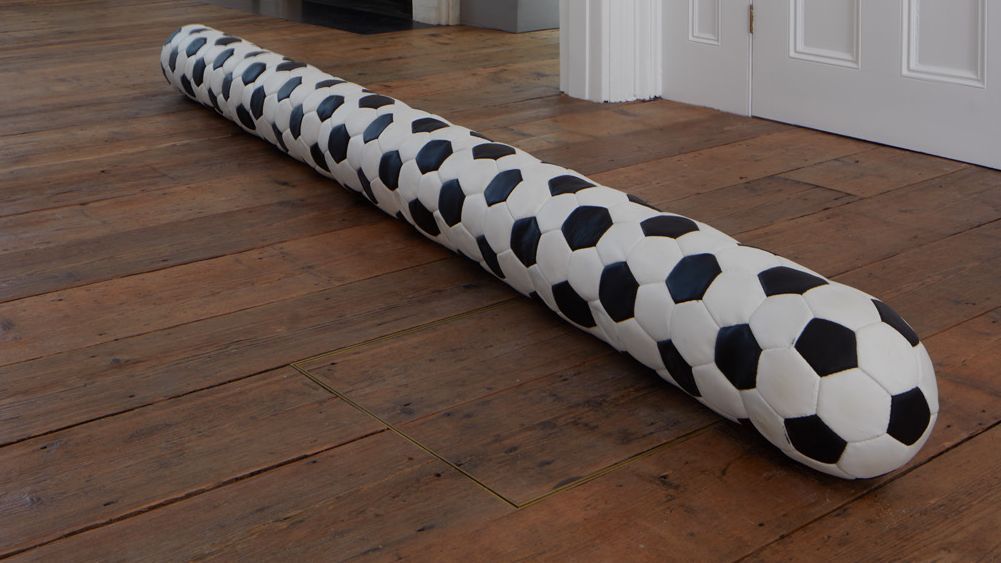 With several restaurants, Europe’s longest bar and even an on-site brasserie, many visiting fans have already tasted the first-rate hospitality offered at the new Tottenham Hotspur stadium since the Premier League club opened there. two years ago.

However, the north part of London stepped things up this summer by hosting its first in-house art exhibition. The Spurs allowed OOF, the art and football magazine, to host a football-themed exhibit in Warmington House, a Grade II listed building next to the stadium which is connected to the club’s megastore and owned by the Spurs .

The space has been transformed into a contemporary art gallery which hosts its inaugural exhibition, “BALLS”, a showcase of sculptures both inspired and composed of soccer balls in various forms. “BALLS” features work by a number of established artists such as Sarah Lucas, Marcus Harvey and Abigail Lane, as well as commissioned pieces from emerging local talents like Rosie Gibbens, Lindsey Mendick and Jazz Grant.

According to OFA co-curator Justin Hammond, the brief was to “sabotage” the conventional function of a soccer ball – a concept that is undoubtedly familiar to Spurs fans – and turn it into something spectacular, unrecognizable and completely unrelated to the game.

With many pieces described by Hammond as â€œvisual punchlines,â€ BALLS brings together the worlds of football and modern art to create a light blend of introspection, nostalgia and fun.

In fact, made from stitched leather, the world’s longest ball is exactly that. It would certainly be a challenge to send a free kick to the top corner using it, although Perbos’ elongated ball is likely even more aerodynamically stable than the Adidas Jabulani. Former Tottenham captain Ledley King couldn’t resist a cheeky little kick when he saw the exhibit.

Two pieces of athletic gear that will cause nostalgia nostalgia in many 1990s kids are recreated here, though we don’t remember here ever having been all the rage for microwaves.

“You make it so hard to love yourself (Tainted Love)” (Lindsey Mendick, 2021)

A turquoise ceramic soccer ball sewn together and decorated with shredded pieces of flora and fauna. Like a long lost playground ball recovered from a ditch after many years.

The Endless Column consists of a pile of fiberglass soccer balls stacked in a vertical column which, despite the name, actually ends quite abruptly after the 10th metallic sphere.

Soccer balls arranged in clumps to give the impression of two brooding clouds hanging in the air, with only the thinnest of ties preventing them from flying away completely.

Ouch. It’s a late career injury if we’ve ever seen one.

An abstract artwork that uses soccer balls, bottles and fabric to create a colorful â€œenergy drink dispenserâ€ allowing players to dine in the middle of the game while kneeling on the surrounding pads.

A sprawling wall piece that uses the hexagons of an unchecked soccer ball to create an animated collage of scenes from 1970s English football, including the widespread hooliganism of the era.

Looking like an entire school year of crumbling leather soccer balls pulled from the gym roof, Deller turned 21 balls over and coated them individually to create an intriguing tattered wall mural.

This piece features a bronze cast of a wilted celery stalk on top of an old blue soccer ball, in reference to a rather rude chant sung by Chelsea supporters.

A concrete football. Hopefully King didn’t try to kick this one out.

Harvey’s bronze cast depicts an old-fashioned football from the 1960s slowly deflating in the middle of the room. It is said to be an allegory of the decline of the British Empire, although some viewers have also mistaken it for a large chair.