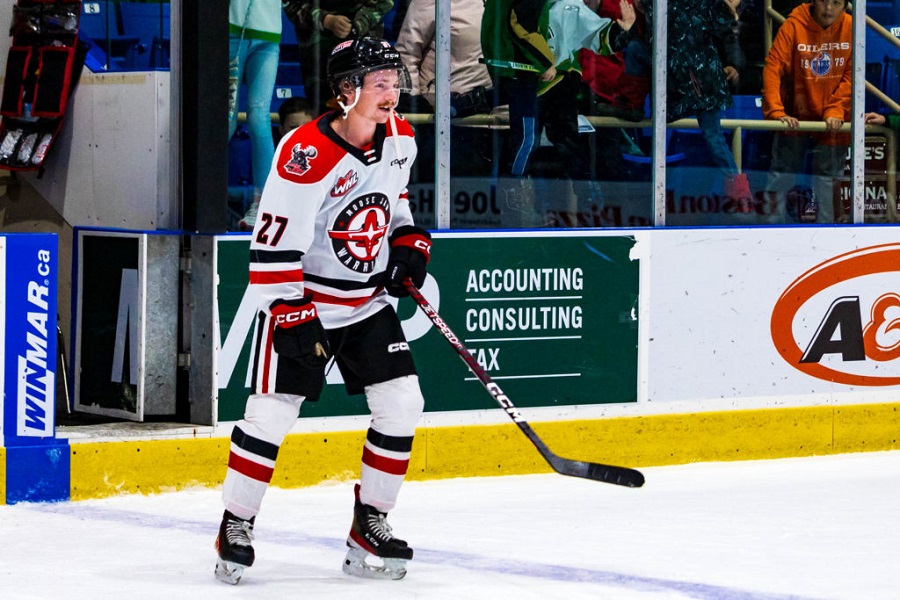 The Moose Jaw Warriors finished strong against the Prince Albert Raiders on Friday night to come away with a big win to open the weekend.

Jagger Firkus scored the game-winning goal, shorthanded in the third period to help the Warriors come back 3-2 against the Raiders at the Art Hauser Center.

“I like that we hung on, we got a few saves from our goaltender and we got through it,” Warriors assistant coach Scott King said.

“PA come as advertised, they are a tough team to face in this building. They generate a lot of energy here.

The Warriors trailed 2-1 heading into the third period, but goals from Firkus and Riley Ginnell just 1:06 apart early in the period tipped the game in favor of Moose Jaw.

Ginnell’s goal didn’t come until 4:19 of the third period and landed a big ape in the back of the 20-year-old forward as it was his first since being acquired by the Warriors.

“It was a great moment in the game and for him, I’m sure it feels good for him,” King said.

Both of Prince Albert’s goals came on the power play as they finished the night 2 for 5, including three power plays in the third. The Warriors didn’t score in their two power-play opportunities.

King said the Warriors needed to play in a more disciplined way.

“You can be physical and obviously it’s about being on the right side of the pucks and if you do that you’re usually in a good place where you don’t have to take a penalty,” he said. declared.

Prince Albert opened the scoring late in the first period on a goal by Landon Kosior.

The Warriors were able to respond straight away with Robert Baco blasting his second of the season to tie the game at 1-1 after one.

The Raiders scored the only goal in the second when Nolan Allan snagged a power-play marker to make it 2-1 after two.

The Warriors’ fast hitting early in the third period gave them some breathing room and some big saves from Connor Ungar on the penalty kill sealed the victory.

The Warriors will now head home for a big battle with the Red Deer Rebels, who beat Swift Current to move to 14-0-0-0 this season.

CLICK HERE TO BUY TICKETS FOR THE SATURDAY MATCH